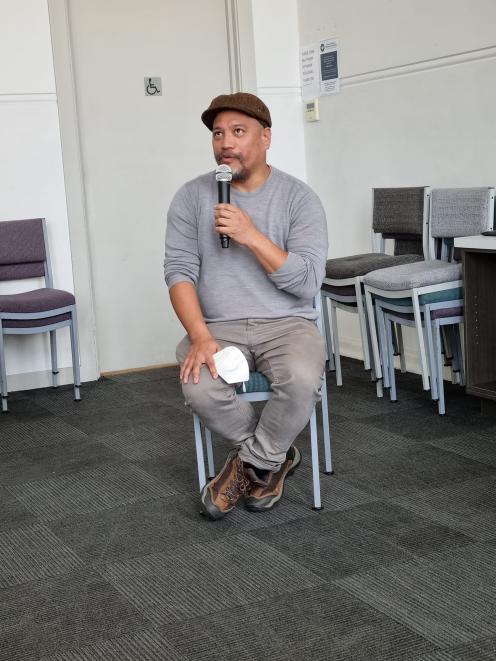 While the weather was not as severe as it was during the party annual conference here in 2019, which coincided with a blizzard, it was certainly pretty darn cold: so, full credit to Mr Tuiono for looking far happier than any North Islander had the right to be when he was taken outside to visit a farm.

The mood inside was much warmer though, as the southern Greens got down to business.

High on the agenda, while not at the top, was planning their campaign for this year’s local body elections.

While of the utmost importance for the Dunedin branch, as the sitting mayor Aaron Hawkins and councillor Marie Laufiso were elected on the Green ticket, the wider southern district is not quite as vitally concerned about their electoral prospects.

Having said that though, the pair are again standing under the party banner this October, and party Dunedin co-convener Alan Somerville is also tilting for a seat at the Otago Regional Council table, and with no sitting MP in Otago or Southland some sort of eco standard bearer in the region is important for the Greens.

Local body politics are a very different beast to national politics — not the least of reasons being that they are conducted under a completely different electoral system — but Dunedin has long been a valuable source of party votes for the Greens come general election time, and it very much wants to remain prominent on the city’s political landscape.

While this year’s election may have been uppermost in the minds of some of the party faithful last weekend, for most of the actual and digital participants it was next year’s election which matters.

Historically support parties such as the Greens have tended to poll poorly after a stint aiding a major party in government but it bucked that trend in 2020 and returned to Parliament by a comfortable margin, albeit after a few scares in the early opinion polls.

Yes, the Greens did have a strong wind in its power-generating turbines courtesy of the nationwide leftwards swing, but it could equally have found itself swamped by the Labour juggernaut that shift brought to power.

Ironically, the party suspects National and Act might have done it a favour in that respect: there is a belief that the increasingly strident calls from the right for people not to vote Green might actually have encouraged people to vote that way.

A bit more than a year out from the election, the Greens continue to poll well over the 5% threshold, and have seemingly been unaffected by the evaporation of support for the left in recent months.

That said, all is not entirely rosy in their garden, as some of those in its activist wing remain unconvinced that the party is taking big enough strides for the planet or for social justice in its ministerial portfolios.

The announcement last month of New Zealand’s first three emissions budgets may have been hailed as a major moment in history by some Greens, but for some outspoken others it was a missed opportunity to go further and faster to try to slow up climate change.

Another of those periodic eruptions of discontent came last year when Dunedin’s James Cockle challenged party co-leader James Shaw for his job.

Mr Cockle was well-beaten, but the Greens could well have done without the delegation from one of its powerbases being split on whether to back the ‘‘favourite son’’ candidate or not.

The Dunedin Greens have their own AGM this weekend, and restoring unity prior to the election campaign will be important for the party’s chances.

All the southern branches share one concern though — securing an electable position on the party list for a local.

As things stand Eugenie Sage is the only MP in the South Island, an unfortunate state of affairs for a party which takes representation very seriously.

The party has recently revamped its constitution and governance structures to reflect that, something which may well make the already competitive exercise which is ranking the Green list even more fraught.

Obviously every region wants an MP, but unless the political landscape shifts remarkably there are only so many seats that the Greens are going to have once the dust settles on the 2023 election

For now though, Covid-19 permitting, the South will have to rely on MPs jetting in from elsewhere.

To be fair, the caucus has been prepared to travel and most, if not all, of the Greens’ MPs have made it to Dunedin or further afield so far this term.

Several are expected to be down for Re-orientation Week and the Dunedin local body campaign launch, which is likely to be scheduled for about the same time.

On June 22 the most recent Green MP resident in Dunedin, Gareth Hughes, is back in the city as part of the book tour promoting his new biography of former party co-leader Jeanette Fitzsimons.

It will be something of a return home for his subject too: Ms Fitzsimons was born here and spent her early childhood in Mosgiel.

On to a winner

A few years back Dunedin Labour MP David Clark was prominent in a cross-party campaign which secured the future of the Invermay Agricultural Centre.

He was back on the plains on Tuesday visiting agritech firm Techion, which is based at the centre, and touting the success of that and other firms as evidence that those who backed Save Invermay were on the right horse.

For those who think MPs are on a cushy billet, consider a day from Invercargill National MP Penny Simmonds’ diary this week.

Having travelled to Auckland for early childhood and tertiary education meetings, she also took part in a select committee meeting on the Fair Pay Agreement Bill, spoke to a Superblues group meeting in Botany, and met with National’s Chinese Special Interest Group.

Ms Simmonds then flew to Christchurch, only to discover her connecting flight home was cancelled, necessitating a drive south in snow and hail.