Poet’s values for the ages 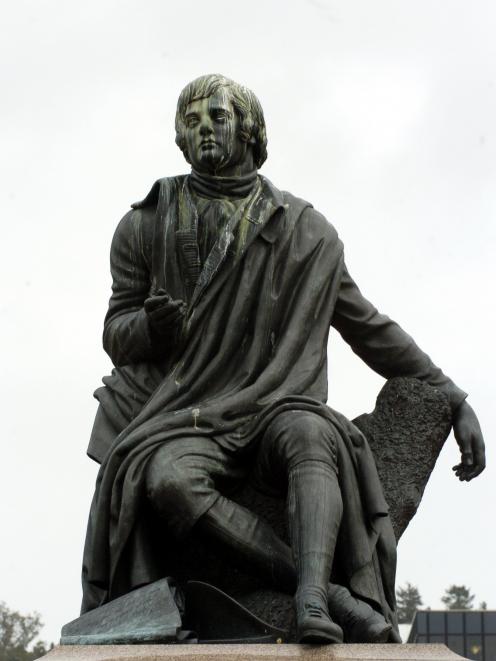 Almost one year after my mother Helen’s death, I find myself perusing her book collection and flicking through a little volume entitled Dunedin: The city in literature, one of the many books I bought her during her  10 years of living with dementia. I am eternally grateful that for the majority of that time, her passion for fine writing sustained her and she was able to live very much in the presence of the words on the page and the memory of verse in her mind.

The hapless editor of the said volume dared to write of my mother’s beloved bard, Robert ("Rabbie") Burns: "He may be irrelevant, but he is nevertheless revered." The first clause is highlighted by way of impatient penned asterisks and Helen’s indignant expletives and marginal scribbles read: "Burns irrelevant!!! An ignorant woman this writer! Ye Gods!"

I chuckle, feeling a mixture of delight at my mother’s ferocity in the face of this insult and shame that I actually bought her this volume, unaware of the views expressed within its first pages.

And so it is, that one year after her departure from this world, my mother continues to champion her much revered Rabbie Burns and I am compelled to honour her reverence for this poet as his birthday approaches at the same time as the anniversary of her death.

Mum’s funeral service featured a recording made only a few months before her death of her reciting Burns’ "Tae a Moose, on Turning Her Up in Her Nest with the Plough" (To a Mouse). For those not fortunate enough to have been raised on Burns as I was, this poem speaks of the regret felt by Burns when he accidentally destroys a mouse’s nest while ploughing his fields. His regret for this destruction and his subsequent reflections on man’s negative impact on the natural world are very moving. Burns tells the mouse:

I must have the Scottish sentimentality gene good and proper, but hey, isn’t this very relevant? Surely if we all felt a bit more of the reverence for the natural world that Burns is demonstrating, things would look up for the future of our beautiful and imperiled planet.

My father’s funeral service some eight years earlier also featured Burns. A trade union official who dedicated his life to support of the workers, what more fitting epitaph could we find for him but that provided by Burns’ song lyrics: "A Man’s A Man For A’ That"? The song powerfully espouses Burns’ egalitarian values, the worth of honesty over monetary wealth and expresses his desire to see unity rather than division in the world.

"That Man to Man, the world o’er,
Shall brothers be for a’ that."

Idealistic perhaps, but I find it hard to think of any more pertinent and inspirational sentiment in these days of 9/11 and Donald Trump.

Moving on from memories of parental funerals, I contemplate the personal messages I received centuries later from the bard himself. As a young adolescent, I remember distinctly the joy of making sense of the brief verse featured on a postcard in the spare bedroom:

"O wad some Power the giftie gie us
To see oursels as ithers see us!
It wad frae mony a blunder free us,
An’ foolish notion:"

It clicked! If we can develop self-awareness and an ability to understand how others may perceive us, it can certainly make life more rewarding. I have often reflected on this verse in workplaces and in personal relationships. It continues to challenge and inspire me on many levels.

Still a niggling doubt remains. Have I just been indoctrinated, trained to find relevance where none exists? Have I failed to realise what the rest of the world knows — that Burns is irrelevant? I refuse to believe it. I google. I am awash with relief! My search uncovers manifold references to: the wonderful ceremony of Burns’ suppers still very popular today; the hilarity and theatrical worth of the Address to the Haggis; the poignancy and ubiquity of Auld Lang Syne; and  the homage paid to Burns’ values by  literary geniuses J. D. Salinger and John Steinbeck in their respective works Catcher in the Rye and Of Mice and Men.

Ruth Wishart, journalist and broadcaster, provides the ultimate gem. She encapsulates my thinking when she writes of Burns: ". . . it is in his celebration of international brotherhood, of social equality, of honest toil and just reward that his global adherents still rejoice more than two centuries after his death. We still extol the virtues he espoused. Robert Burns left an extraordinary body of work in both Scots and English. But had he written nothing else than this poetic fanfare to the common man, he would have still deserved his iconic stature."

And so, with sentimental heart and in loving memory of my mother, on Burns’ birthday I will raise a glass to you all my fellow mortals and "tak’ a cup o’ kindness yet" hoping  these ramblings may inspire a few of you to reach for the shelves and discover a special message of enduring relevance from the man himself.