Refugees - a chance to do right thing 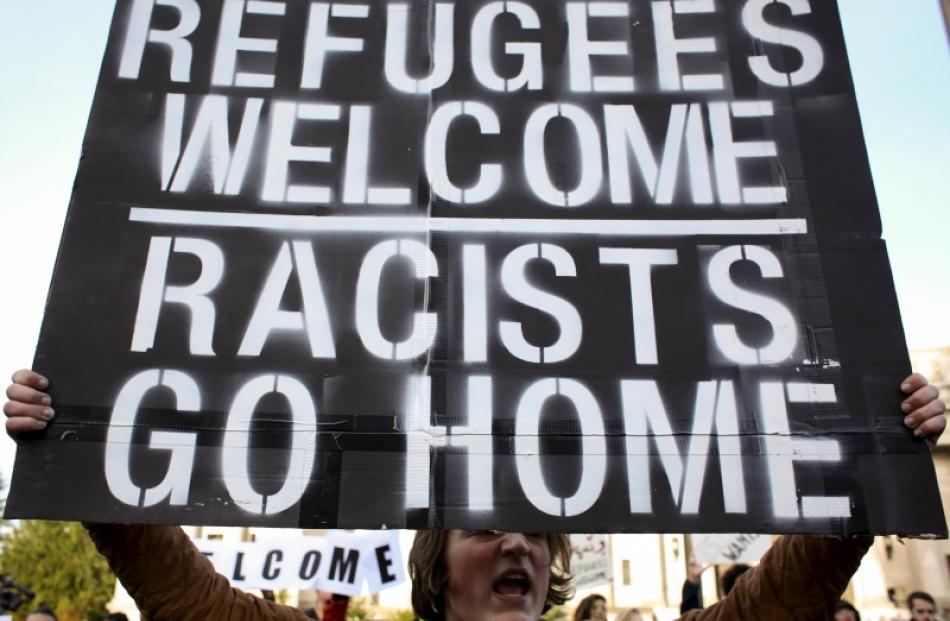 There must be no tolerance for racism or prejudice when refugees arrive in Dunedin. Photo by Reuters.

The refugees who will arrive in Dunedin may bring a great gift for us, if we are willing to accept it, writes Victor Billot.

The news a refugee resettlement centre will be established in Dunedin is good news.

We can play a modest role in bringing hope to a small number of innocent people caught in the terrifying human tragedy we see unfolding before us on the news.

Shortly after the announcement, social media was abuzz with comments from local people.

Some were positive, yet many comments were negative and even hostile.

It is important that genuine concerns be addressed, and unreasonable statements challenged.

Some have pointed out unemployment and housing is already an issue for less-well-off locals.

But the resettlement of a small number of refugees will not ''take jobs'' from Dunedin.

If people are concerned about unemployment, slate the blame home to where it lies.

There's not much point asking a 5-year-old Syrian refugee ''Where are the jobs?'' - ask John Key, especially if you voted for him.

The arrival of refugees will probably generate a small amount of additional employment.

Some are likely to be highly skilled people.

The cost will be largely borne by the central Government so it will mean income for Dunedin.

If there is a housing shortage, let us build for those who are already missing out, and a small number of additional refugees.

The stadium was unaffordable but it was built.

The retrofitting or construction of basic accommodation is affordable.

Then there is the suggestion we are welcoming terrorists into our midst.

There are millions of displaced people at the moment.

We will be taking, locally, a rather pathetically small fraction of a fraction.

Dunedin is of limited strategic interest for anyone.

We don't even appear to be of strategic interest to our own Government most of the time.

There is always an element of risk in any situation like this.

But to blame millions for the crimes of a few dozen lunatics is not only foolish but it is also immoral.

If we are concerned about security, consider the two terrorist attacks in modern New Zealand, of which one was undertaken by the French Government, and the other by an unknown person who bombed the Wellington Trades Hall in the 1980s, killing the caretaker.

The main dangers to a Dunedinite these days come from drunken yobs in the Octagon on Saturday night, bad driving, rotten health and safety at work, and second-hand cigarette smoke.

Let's keep the threat in perspective.

Why should we help, ask others?

New Zealand has an obligation to fix some of the harm we did by supporting the ill-advised US-led crusade in the Middle East.

Finally, are the less reasonable concerns - the racism, the bigotry, the ignorance.

I am no fan of organised religion, including Islam.

In fact I am a somewhat hardline atheist who supports a secular society.

But the idea that we are going to be ''swamped'' by some alien culture is garbage.

There must be no tolerance for racism or prejudice.

We have among our city the descendants of the tangata whenua, the Maori, and all those who have come in later times: Scots, English, Irish, Chinese, Lebanese, Dutch, Pacific, Polish, Vietnamese, and many more.

We even have a few Australians.

These people are not ''others'': today they are our friends and families.

Being the son of an immigrant, I find narrow-minded attitudes aggravating.

My father was born in Jersey, in the Channel Islands, a few weeks after it was occupied by Nazi Germany, very early in World War 2.

The first years of his life were marred by this event, along with millions of others in his generation.

As a young man, he left and came to Dunedin where he settled and raised a family with two children.

Both of those children, of whom I am one, have chosen to live in Dunedin as adults, and contribute.

This story is not at all unusual.

I am sure that the desperate families fleeing terror and slaughter in Syria who find their way to our farflung city will repay our gesture of friendship and solidarity ten-fold in years to come.

Let us take the higher road.

It may do us a power of good.

The refugees who will arrive here may bring a great gift for us, if we are willing to accept it.

They will be giving us the chance to do the right thing, and in the process, we may perhaps find something of our better natures that we have started to lose.

• Victor Billot is a writer, editor, unionist and former parliamentary candidate for the Alliance Party.