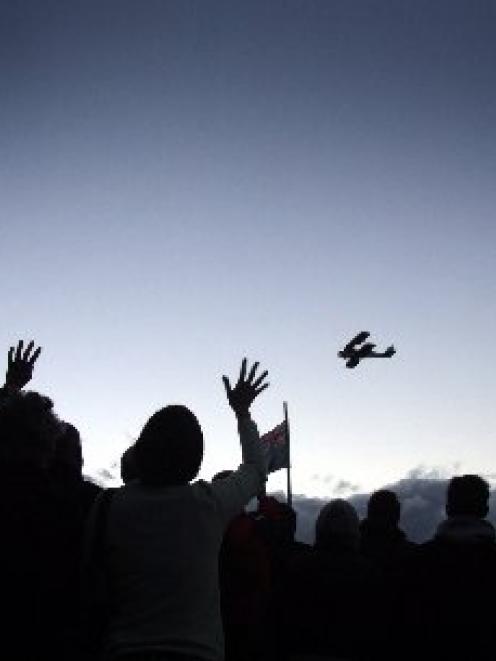 People wave to a Tiger Moth pilot during a flyover at the Lake Hawea Anzac Day dawn service in 2011. Photo by Matthew Haggart.
If the stories are not recalled, they will be forgotten.

On Anzac Day each year, a big group congregates around the flagpole on the shore of Lake Hawea at 7am.

In the darkest hour before the dawn, we drive down to the lake and walk to the point. And I cry.

Because it's that easy. Heater blowing, family intact. Warm and fuzzy in remembrance. Safe in the realm of stories: we know we'll never get The Call.

It's just coming light as one of the primary kids reads a list of local names. Lest we forget.

I don't know my grandfather's war stories, though I've got a photo of him and his colleagues in uniform, grinning, by a plane.

My other granddad took his Polish war escapades with him to the grave, though I've been half-told stories of escapes and refusals to fire the weapon he was given.

I know my Babcia got her nose measured for Jewishness by the Nazis.

My brother: he's fought in wars. Has lived to tell the tale, as they say, although I wonder how many stories of what really happens we really want to hear. It's the myriad truths that get me.

I've only been to war through reading its words. I cry at the classics, but it's lines by a guy called Tim O'Brien, who wrote The Things They Carried, that ring out in my memory:

''War is hell, but that's not the half of it, because war is also mystery and terror and adventure and courage and discovery and holiness and pity and despair and longing and love. War is nasty; war is fun. War is thrilling; war is drudgery. War makes you a man; war makes you dead.''

He details things that the soldiers carried with them into battle. Photos of loved ones. Maps. Courage. Humidity.

''They carried all they could bear, and then some, including a silent awe for the terrible power of the things they carried.''

My kids are studying the Great War at school, and even have some ideas about why it might've been great. The size, Mum. It was big. It was the world.

We discuss what the soldiers might've put in their backpacks, the logistical difficulties of leaving your bag on a beach, when it looks like everyone else's bag, and finding the right one when you come back alive.

They say when, not if. To us, strapping on a backpack equates to travel, discovery, adventure. The war is Warbirds, noisy old planes, girls with red lips and mirrors in their bags.

I think about the contents of my own bag. Pens, coins and receipts lining the bottom. A book, just in case. Or sometimes two. A phone, a wallet full of cards. Lip balm I never wear. But I could easily downsize. A world in my pocket.

That phone can hold more maps and pictures than a battalion carried with them. I can wave my sliver of plastic, 86mm by 54mm, in exchange for goods and services, no fumbling with coins.

If I want to know why they sell poppies to mark the war, or why it started or when it ended, my phone is smart enough to tell me. Although, I know the answers to those ones.

I am old enough that, as a child, I was taught not just to process information, but to remember. Lest we forget.

My own favourite war story sees my brother standing next to a journalist. In my mind the journo is wearing those fake practical desert clothes and my brother is nut-brown from the constant glare of the sun. He hasn't spoken to his girlfriend for days.

She and my mum are counting them. I don't know how he usually gets to make phone calls out there, I can't imagine cellphones being a routine part of the things they carried.

But in this story he sidles up to Ms Journalist and says, ''You've got a sat phone, I've got a gun. You know what you have to do.''

And he dials up his girl. I can't imagine what was said. That's not for me to know. But I'm sure every nuance of the conversation was dissected later, pored over like old photos with curling edges. My own favourite phone calls often involve me standing in a foreign booth, feeding the slot with coins, saying nothing of importance between urgent beeps.

But connected, all the same, in a way I don't feel while I'm palming off another text, half listening to someone speak. I think that's why I cry on Anzac Day.

And berate myself for half efforts at honouring stories. Because, in the grey light, I stop. And listen to those names.

Each of them will have a story that could make you cry. And stories, too, can die. Unless we remember.