Snowden sets debate for our futures 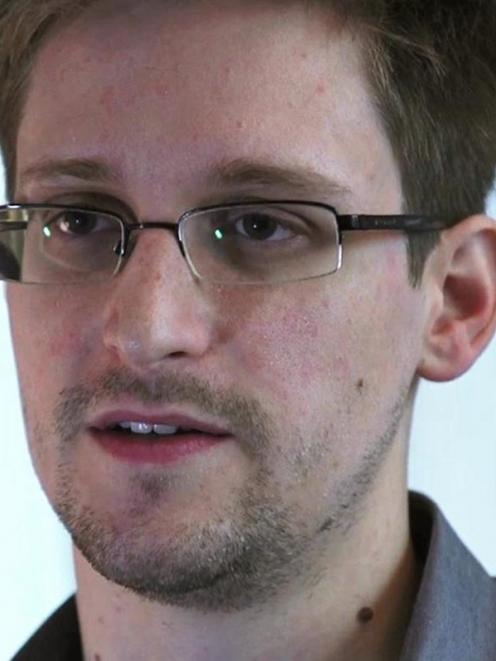 Former US president George W. Bush did it weeks after he invaded Iraq, and it will be quoted in history books a century hence as proof of his arrogance and his ignorance. British Prime Minister David Cameron did it a couple of weeks ago in Afghanistan, and you didn't know whether to laugh or cry. But when Edward Snowden said it this week - ''In terms of personal satisfaction, the mission's already accomplished'' - nobody laughed.

Unless you just want a list of events, a year-end piece should be a first draft of history that tries to identify where the flow of events is really taking us. By that standard, Snowden comes first. The former National Security Agency contractor, once an unremarkable man, saw where the combination of new technologies and institutional empire-building was taking us, and stepped in front of the juggernaut to stop it.

''You recognise that you're going in blind ... ,'' Snowden told the Washington Post.

''But when you weigh that against the alternative, which is not to act, you realise that some analysis is better than no analysis.''

So he fled his country taking a huge cache of secret documents with him, and started a global debate about the acceptability of mass surveillance techniques that the vast majority of people did not even know existed.

As Snowden, now living in exile in Russia, put it in a Christmas broadcast on Britain's Channel 4: ''A child born today will grow up with no conception of privacy at all. They'll never know what it means to have a private moment to themselves, an unrecorded, unanalysed thought.''

Unless, that is, the monster of state-run mass surveillance is brought under control.

This is not just an American issue, though the protagonists in the debate Snowden has unleashed are inevitably American. These techniques are available to every government, or soon will be. The tyrannies will naturally use them to control their citizens, but other countries have a choice. The future health of liberal democratic societies depends on the restrictions we place on these techniques in this decade.

''The conversation occurring today will determine the amount of trust we can place both in the technology that surrounds us and the government that regulates it,'' Snowden said in his Channel 4 broadcast.

''Together we can find a better balance, end mass surveillance and remind the government that if it really wants to know how we feel, asking is always cheaper than spying.''

He has paid a high price to give us this opportunity, and we should use it.

Now, in no particular order, some other new things last year, most of them unwelcome. Have you noticed that protesters are starting to use non-violent techniques to overthrow democratically elected governments?

We have grown familiar with the scenes of unarmed crowds taking over the streets and forcing dictators to quit: it didn't always succeed, but from Manila in 1986 to Cairo in 2011 it had a pretty good success rate, and at least two dozen dictators bit the dust. But the crowds were back in Tahrir Square in Cairo last July to overthrow President Mohammed Morsi, who had been elected only one year before in a free election.

Morsi had won with only 51.7% of the vote, and a lot of people who did vote for him were holding their noses. The secular liberals who had made the revolution in 2011 divided their votes between several rival presidential candidates, leaving voters in the second round with only a choice between Morsi, the Muslim Brotherhood candidate, and an adversary who was part of the old regime.

Morsi often talked as if he had a mandate to Islamise Egyptian society (though he didn't actually do all that much), and it alarmed the former revolutionaries. They could and should have waited for the next election, which Morsi would certainly have lost, mainly because the economy was still a wreck. But they were too impatient, so they made a deal with the army and went back out on the square.

Their little pantomime of non-violent protest lasted only two days before the army stepped in and removed Morsi from power. It subsequently murdered about 1000 of Morsi's supporters in the streets of Cairo to consolidate its rule, while the men and women who had been the heroes of the 2011 revolution cheered the soldiers on. And now these ''useful idiots'' are joining Morsi and his supporters in the regime's jails: the counter-revolution is complete.

But it gets weirder: in Thailand, for the past two months, non-violent protesters have been explicitly demanding the end of democracy. They are relatively privileged people, mostly from Bangkok and the south, who bitterly resent the fact that a series of elected governments led by Thaksin Shinawatra or his sister Yingluck has been spending their tax money to improve the lives of the impoverished rural majority in the north of Thailand.

Naturally, most of the poor vote for the Shinawatras, who win every time there is an election. In 2006, the rich party (''yellow shirts'') conspired with the army to remove the party of the poor (''red shirts'') in a coup, but as soon as there was an election, the Shinawatras' party returned to power. So now the ''non-violent protests'' have begun again, supported by the prosperous middle class of Bangkok, and this time they are demanding a non-elected ''people's council'' made up (surprise!) of people like them.

Prime Minister Yingluck Shinawatra responded on December 9 by calling an election. But of course the ''yellow shirts'' don't want an election, because they would lose it. They have declared a boycott of the vote, scheduled for February, and resumed their demonstrations. Democracy is their enemy, and non-violence is their weapon.

Meanwhile, in Africa, wars have exploded across the continent last year like a string of firecrackers. In January, France sent troops to Mali after Islamist rebels who had already captured the sparsely populated north of the country threatened to overrun the rest of it as well. The north was more or less reconquered by mid-year, but the situation remains highly fraught.

In March, Muslim rebels captured Bangui, the capital of the Central African Republic. Their leaders quickly lost control, and the rebel troops began to massacre Christians. Christian militias then began carrying out mass reprisals against the Muslim civilian minority, and thousands, perhaps tens of thousands, were dead before French troops arrived in December. A kind of peace has now descended on the capital, but elsewhere, who knows?

And in December a full-scale civil war suddenly broke out in South Sudan, between the country's two biggest ethnic groups, the Dinka and the Nuer. Pogroms have emptied Nuer districts in the capital, and there are tank battles near the oil-fields as the army splits on Dinka-Nuer lines. The African Union is stripping troops from its other peacekeeping missions to strengthen its force in South Sudan, but this war could end up with killing on a Rwandan scale.

The good news is that there are no major wars anywhere else in the world except Syria, of course. But there are already 120,000 dead in Syria, and more than a quarter of the population is living as refugees either inside Syria or in the neighbouring countries. Siege warfare conditions prevail across much of the country, now a patchwork quilt of government- and opposition-controlled areas.

The United States went to the brink of bombing the regime's key centres after poison gas was used in Damascus in August, but it managed to avoid war after the Russians persuaded Bashar al-Assad to surrender all his chemical weapons. And by now, there is nobody left for the United States to back in the Syrian war, even if it wanted to, because the larger rebel groups are rapidly falling under the influence of extreme Islamist organisations including al Qaeda.

So the war can go on indefinitely, and it has become a proxy Sunni-Shia war. The arms pour in from Qatar, Turkey and Saudi Arabia to the rebel groups, and from Iran and Iraq to the Syrian regime, because the former are all Sunni Muslims and the latter are all Shia Muslims. (Assad's regime is drawn mainly from the 10% Alawite minority in Syria, which observes a deviant form of Shia Islam.)

And the risk grows that all this Sunni-Shia hostility could morph into something like Europe's 16th-century wars of religion, with Sunni or Shia minorities rebelling in Arab countries like Iraq, Lebanon, or Saudi Arabia.

What else? Oh, yes, a list. Right, then. Iran sent a monkey into space in January, North Korea carried out its third underground nuclear test in February, and the Catholic Church got a new head when Cardinal Jorge Mario Bergoglio of Argentina became Pope Francis I in March.

In April, Nicolas Maduro was narrowly elected president of Venezuela a month after Hugo Chavez's death. In May, Silvio Berlusconi, three times prime minister of Italy, was sentenced to four years in prison for fraud. In June, Russia's President Vladimir Putin announced his divorce.

In July, Croatia joined the European Union. In August, Robert Mugabe won his seventh term as president of Zimbabwe, at the age of 89. And in September Japan, emotionally shaken by the Fukushima incident, switched off the last of its 50 nuclear reactors. (This means the Japanese will be burning far more coal to keep the lights on, and so they have cut their target for reducing greenhouse gas emissions by 2020 from 25% to only 3.8%. But they probably feel better about it, so that's all right.)

In October, New Zealand announced the official Maori-language alternative names for North Island (Te Ika-a-Maui) and South Island (Te Waipounamu). In November, Typhoon Haiyan, possibly the largest tropical storm to make landfall in recorded history, devastated the central Philippines. And in December, the Chinese spacecraft Chang'e landed the Jade Rabbit rover on the moon. It was the first soft landing on the moon since 1976. So you see, there IS progress.