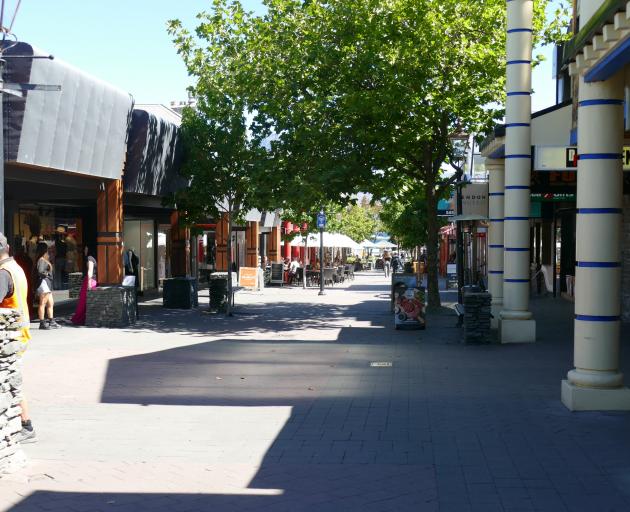 A near-deserted Queenstown Mall last week. PHOTO: TRACEY ROXBURGH
On Monday, about 4pm, many eyes in the South will be focused on Prime Minister Jacinda Ardern’s weekly post-Cabinet press conference.

They will be particularly keen to see if Tourism Minister Stuart Nash or Finance Minister Grant Robertson walk in to the Beehive auditorium with her, at an appropriate social distance, for that will probably mean their prayers have been answered.

All this week Queenstown’s business sector — and specifically its hospitality and tourism sectors — have been clamouring for financial assistance from the Government to help them ride out the Omicron wave.

While things are not as apocalyptic as Queenstown Chamber of Commerce chief executive Ruth Stokes, who claimed the resort would be closed by the weekend if nothing was done, predicted, Queenstown Lakes Mayor Jim Boult was equally forceful in his call for a version of the wage subsidy to return, as well as other financial support for businesses.

Queenstown is far from the only town, let alone the only tourist town, doing it tough in the Covid-19 era, but when it cries for help it pays for New Zealand to listen.

Back what feels like amillion years ago when Covid-19 first appeared in New Zealand, Queenstown and Wanaka were among the first places in the country to detect cases, thanks to a cattle breeders’ conference unwittingly bringing the pandemic to paradise.

The subsequent Level 4 lockdown worked to the degree that Covid mark 1 was stamped out and domestic tourism — and very briefly transtasman tourism — could resume, but in general terms Queenstown has been feeding off scraps for the better part of two years.

On Monday, Valentine’s Day, only one restaurant was open in Queenstown Mall, one of the busier trading nights of the year wrecked by a multitude of hospo staff being obliged to isolate due to being potential close contacts.

A week of negative headlines is normally enough to convince any government to look at taking some action to make the issue go away.

The Government’s books are certainly healthier than expected, as Mr Robertson was delighted to trill about this week at the release of the six-monthly Crown accounts.

That said, the Government also has to consider Covid-19 modelling, which suggests we are at the start of a two-month Omicron wave, and it will not want to spend too much too soon.

Move too late though, and those struggling businesses may well have gone under before any life ring gets tossed in their direction.

As they say, watch this space.

As expected, the Conversion Practices Prohibition Legislation Bill became an Act on Tuesday.

Unusually, rather than the minister in charge of the legislation (Kris Faafoi) making the opening speech in the third reading debate, Deputy Prime Minister and proud former South Dunedin resident Grant Robertson led off.

"I grew up in a religious, churchgoing household in the era of homosexual law reform," he recalled.

"There were plenty of negative messages for me to hear as I grappled with my sexuality and the challenge of feeling very different from those around me.

"When I finally gathered the courage to come out to my parents, I was met with love ... [My father] expressed only one thing that he was annoyed about — he’d heard from someone else and not from me.

"If that was as bad as it got, then I knew I was a lucky person, but not everybody is or was so lucky."

He also had a riposte for the few MPs who opposed the Bill, such as Dunedin National Party list MP Michael Woodhouse, who strongly objects to conversion practices but believes the law change stifles freedom of speech.

"It does not, as some in this House have said, undermine freedom of speech or expression or worship," Mr Robertson said.

"The Bill does not cover the expression only of a religious principle or belief: it is only when that is part of a practice with the intent to change or suppress".

It was an argument which convinced Southland National MP Joseph Mooney, who along with his party voted against it at the first reading but voted in support of it this week.

"There cannot be a prosecution without the attorney-general’s consent, who is a legal expert and will analyse any factual scenario against the clear intention, as expressed in this Bill and in the words of the minister," he said.

"So I thank the minister for making those matters clear during the committee of the whole House stage."

As a kiwi still stuck in OZ, I am relieved that I can finally return home, and self isolate for one week after Feb 28. HOWEVER, my daughter, who will be coming with me can not - because she is over 25 and an Australian citizen. She is not eligible until sometime in July, which is absolutely ridiculous. We are both triple vaxed and she is dependent on me.. So, now it's another 4-5 month wait..