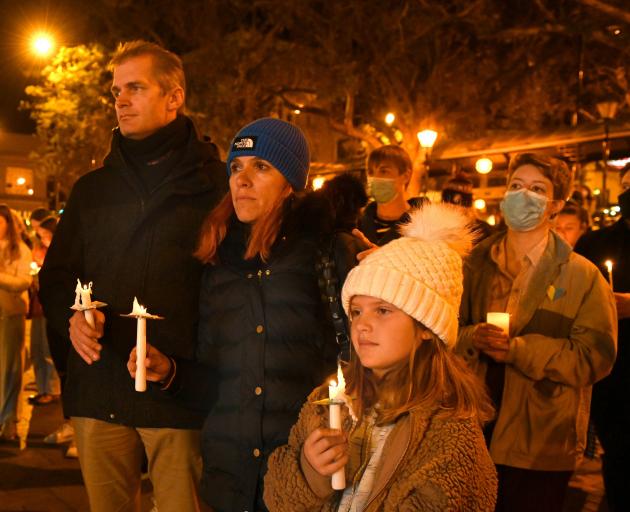 Dennis, Olga and Naomi (9) Pushenko, who are all of Ukrainian descent, take part in a candlelight vigil for Ukraine in Dunedin’s Octagon last month. PHOTO: PHOTO: LINDA ROBERTSON
Dunedin must not give up on Ukraine, writes Peter Matheson.

Under Putin the Russians seem bent on leaving the human race.

The cold-blooded gamesmanship in Mariupol rams the message home. Let a trickle of civilians out one day. Seal off the tomb the next. Who cares for the women and children inside! The May 9 Victory Parade in Moscow to celebrate the defeat of Hitler threatens to morph into the defeat of our common humanity. How do we in little Dunedin resist this slide into barbarism and our own helplessness?

In the Judaic tradition prayers are the gestures of love.

For three months now our Ukrainian fellow-citizens have been gathering in the Octagon every Saturday with their flags flying, Dunedin folk standing in solidarity with them. A little gesture, but “Dunedin has become our family”, as one of the Ukrainians put it.

Everywhere in the city blue and gold Ukrainian flags are flying. At the candlelight vigil in the Octagon on April 28 the ghastly images from Mariupol danced on the big screen, and we listened to heart-rending cello music as Heleen du Plessis played the lament for war composed by the Dunedin composer Andrew Perkins. Nearby pubs shut down their outdoor speakers so we could listen to the music in peace and observe a minute’s silence. Pain was shared. Karakia were chanted. It felt good to be there.

We need to keep reminding ourselves through gestures like this that there is another world.

That the headlines only tell part of the truth. Recently, sauntering along one of the tracks in Orokonui we glimpsed this blackbird. But our eyes deceived us. It was much more special!

We got our first ever close-up of the diminutive black robin, white breast spotless, pecking away at the ground on its frail little legs, ignoring the monstrous humans just a whisker away. A truly regal performance.

A little further along the track the air was positively rocking as tui and koromiko pulled out all the stops. There seemed to be myriads of them. One thought of the first settler ships edging up the harbour to hallelujahs of birdsong. What a triumph Orokonui represents for us all.

We could breathe deep again there, after being bombarded day after day by gross images of catastrophe: Ukraine, Covid, hate speech, environmental melt-down, you name it.

And of course the temptation is always to pull up the drawbridge, to shut one’s ears, to turn off the flickering screen. But blinkers are no answer. That’s exactly what most Russians have done, after all. Trusted Vladimir to look after them . . .

Orokonui, all the green spaces, are vital because they remind us of another world, fill our lungs with good fresh air. Exude the boundless creativity of Mother Nature. But we also need good clean human air and human creativity to purge the filth spread by the Trumps and the Lavrovs and their ilk. We need our artists, our poets, our musicians, our dancers as never before. Musicians, we know, are out there in the very heart of Kyiv, sounding their defiant notes of hopefulness.

Our challenge is to shift the parameters, lest our eyes deceive us, and to draw on the deep well of human goodness. I was very touched to hear of the young student who went to school draped in Ukraine colours and wearing his “We are Ukraine” armband. Dunedin is not giving up on the Ukraine.

Gestures are important, then, as are connections across the generations, across the cultural and national boundaries. Connected people don’t need to be violent.

I’m fortunate enough to belong to a church community which keeps reminding me to look beyond the self. Others find similar stimulation in all manner of community associations, te reo classes, University of the Third Age gatherings, trade unions, political parties.

So no way are we going to give up on the Ukraine. Hitler hit the dust. Apartheid is just a memory. The Berlin Wall came tumbling down. And with a little bit of luck Putin, too, will soon be consigned to the rubbish bin of history.