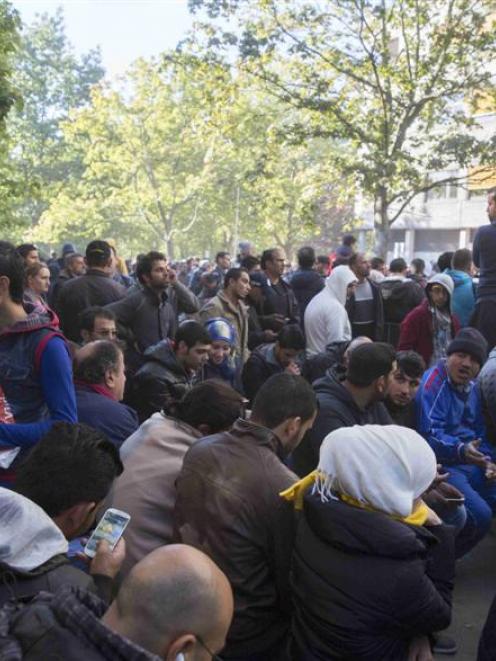 Two months ago, German Chancellor Angela Merkel amazed the world by opening Germany's borders to all the genuine refugees (mostly Syrians and Afghans) who could get that far.

She must have known her own people well, because ordinary Germans showed extraordinary sympathy and generosity to the new arrivals.

Even when the first estimate of 800,000 refugees coming to Germany this year went up to 1.5 million, the ''welcome culture'' stayed strong.

Only one month ago Ms Merkel's action still had the approval of half the population, with only 40% thinking her policy was wrong.

Now, those numbers are reversed, and the voices of dissent are multiplying.

Even Horst Seehofer, the prime minister of the state of Bavaria and leader of the Christian Social Union (CDU), has lost patience, saying that ''no society can cope with an influx on this scale''.

In fact, he's threatening to challenge her policy before Germany's Constitutional Court.

That's just ''compassion fatigue'', you might say, and you would be right.

Bavarians have seen 175,000 refugees arrive in their midst in just the past month.

Many of them will move on to other states eventually - but another 175,000 will probably arrive in the coming month.

The scale of the refugee influx into Germany is almost unprecedented in modern European history: one and a-half million people in six months (for the refugees only started arriving in large numbers in July).

It's as if the United States, with four times Germany's population, were taking in one million Syrian and Afghan refugees every month.

Americans would never accept that.

What's surprising is not the fall in support for Ms Merkel's policy.

It's the fact that it is still so strong, even though no other member of the European Union is being anything like so generous in its refugee policy.

(Britain has offered to take in 20,000 refugees over the next five years.)

There must be something special about the German response.

There is certainly something special about modern German history, though most people elsewhere have forgotten it or never knew it.

Not the Nazis and the war, but what happened at the end of World War 2 and just afterwards.

As the Soviet army rolled west across eastern Europe in early 1945, huge numbers of ethnic Germans fled before it.

Hundreds of thousands of them died of cold, hunger and the constant bombing, but between six and eight million made it into what is now Germany before the fighting ended.

Almost as many more were expelled from Eastern European countries in the following five years, mostly from Czechoslovakia and the parts of Germany (about a fifth of its current area) that had been given to Poland by the victors.

Between 1945 and 1950 some 12 million German refugees arrived in Germany - a Germany that had been bombed flat and was desperately poor. Even food was scarce in the early postwar years.

But the Germans took the refugees in, shared what they had with them, and together they gradually pulled their country out of the hole it had dug for itself.

Germans don't like to dwell on this period of their country's history, but it hasn't been forgotten.

Indeed, one-fifth of today's Germans are those now elderly refugees and their children and grandchildren.

Deep down Germans have an understanding of what it is to be a refugee that no other Western Europeans can share.

Does this explain why Ms Merkel did what she did?

Nobody can say except herself, and she isn't saying.

She certainly hasn't been a strong advocate of large-scale immigration in the past.

At a meeting with young CDU party workers in Potsdam five years ago, she said that the idea of creating a multicultural society in Germany had failed utterly: ''The concept that we are now living side by side and are happy about it does not work.''

Indeed, she even said that Germans had Christian values and ''anyone who doesn't accept that is in the wrong place here''.

But she grew up in the town of Templin in northern Brandenburg, in what was then East Germany.

When she was a child and a young woman, that area, not very far from the new Polish border, had a population that was 40% refugees.

Does their own refugee heritage explain why half of Germany's 80 million people still support a policy that, so long as it lasts, will be adding one and a-half million more non-German-speaking Muslims to the country's population each year.

Yes, it probably does.