Teachers: the good and the bad 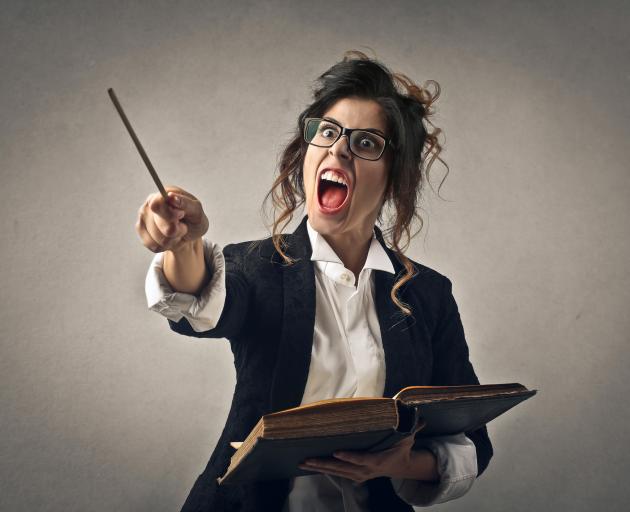 Bad teachers are impatient, stubborn and believe there is only one correct way to do things. PHOTO: GETTY IMAGES
Gina Barreca gives thanks to the great teachers in our lives.

Your best teachers, whether pre-kindergarten or post-grad, know your name, look you in the eye, listen when you make a point and challenge you when you're intellectually, creatively or imaginatively lazy.

You go prepared to their classes, because while they recognise your abilities, they also see when you're trying to escape the rigour and responsibility of actual engagement.

The worst teachers either care too little about what matters or care too much about what doesn't matter a bit.

As somebody who has spent most of her life as either a teacher or a student and who has published about 2973 pieces about the importance of excellence in education and the significance of teaching, I thought it would be interesting to look at what happens when teachers aren't good at their jobs.

My father was whacked across the knuckles by a second-grade teacher who thought she'd improve his handwriting by adding the threat of pain to the process.

His entire life he had terrible penmanship, whether as a result or as revenge, I never knew. It was so bad that I can barely read the letters he sent home during World War 2, yet his knack for a clever turn of phrase makes deciphering the letters worthwhile. As a radioman, he was deciphering messages through Morse code, after all, with the lives of his brothers in the Army Air Force hanging in the balance; it was then that he had to mind his Ps and Qs.

My father's handwriting didn't matter. His wits did, but his second-grade teacher didn't understand that.

In contrast, and as if to soften the literal blows from second grade, my father told wonderful stories about his fifth-grade teacher, who not only taught her pupils words to the opening arias of a dozen major operas but also took them to museums and libraries. Dragging a motley crew of Brooklyn children around the streets of New York in the 1930s took "moxie," my dad said, and some money out of her own pocket, since children like my father wouldn't dare ask for a nickel from their families for something as frivolous as a subway trip uptown.

I like to think that most of us have had enough good teachers to mitigate our experiences with the worst, because, as many of my teaching colleagues remind me, nobody goes into this profession for the stock options.

So what do bad teachers have in common?

They're impatient, stubborn and believe there is only one correct way to do things. "The worst art teachers tell their students, `That's not the way a giraffe looks. A giraffe looks like THIS,' and then makes the art for the kid," explains Jamie Wolfe Lohr.

The worst teachers are lazy, bored and contemptuous. Jay Shuck said his worst teachers inevitably broke them into small groups and made them do time-wasting teamwork projects.

These are the same pedagogical bright lights who read directly from the textbook or instruct the class to copy what's on the screen.

Lyne Stokes made a convincing case that the "worst teacher tells you to stop reading during recess and go play like the other kids," but Kathleen Walsh said those who "complain to their students about how much they hate their jobs" can also claim the title.

The worst of the worst ridicule their pupils, bully them, prey on their weaknesses, diminish their resilience and worsen their chances of being able to navigate the world that lies ahead.

But teachers who become bitter, angry and indignant are some of the worst teachers precisely because "they have been beaten by the system," argues Sandi Blondin.

"They started out with enthusiasm and hope but year after year were subjected to unsupportive administration, impossible parents, unwilling students and low pay."

Somewhere out there are the world's worst surgeons, worst judges, worst chefs and worst actors, and so yes, the worst teachers are out there, too.

But for every bad teacher who discouraged us, we've all known more who have lifted us. "The best teachers love and respect what they teach," Dale Griffith reminds us, "Almost as much as they love and respect their students."

To great teachers, who far outnumber the worst, we owe thanks and maybe a handwritten note, because while penmanship might not count, gratitude does.

- Gina Barreca is a board of trustees distinguished professor of English literature at the University of Connecticut.