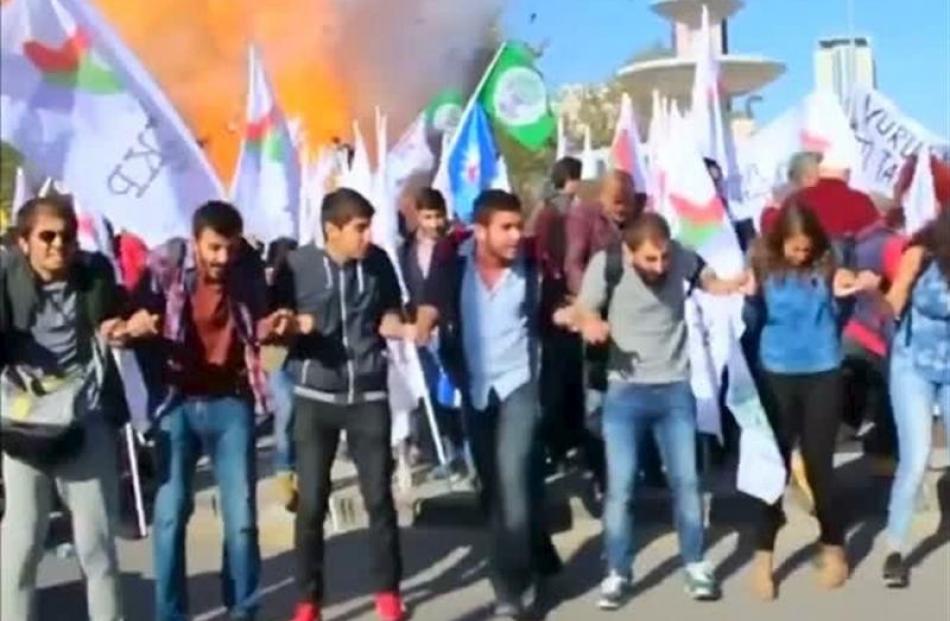 Protesters dance during a peace rally as a blast goes off in Ankara, Turkey at the weekend in this still image taken from a video posted on a social media website. Photo by Reuters.

The death toll from the twin suicide bombs at a peace rally in Ankara on Saturday has reached 128.

The Turkish police were not present to provide security (they never are at ''opposition'' events), but they did show up to fire teargas at the mourners afterwards.

Selahattin Demirtas, the co-leader of the pro-Kurdish HDP party that organised the rally, offered a fourth alternative: people trying to advance the interests of President Recep Tayyib Erdogan's Justice and Development (AK) Party.

The atrocity certainly served Mr Erdogan's strategy of creating an atmosphere of fear and impending calamity before the elections on November 1, in which he hopes to get back the parliamentary majority he lost in the June elections.

But it's hard to believe the AK Party has suicide bombers at its disposal: it is an Islamic Party, but nowhere near that extreme.

It's equally unlikely to have been the work of the PKK, because a very large proportion of the people at the rally were Kurds.

Moreover, the PKK is a secular organisation, which makes it an improbable source of suicide bombers.

The suggestion that ''extreme leftists'' were responsible is ridiculous: what would be their motive?

Which leaves IS aka Islamic State, as the probable perpetrator.

IS uses suicide bombers as a matter of course, and it is certainly angry at President Erdogan.

He treated it quite well in the early years of the Syrian civil war, keeping the Turkish border open for its volunteers to flow across by the thousands.

He even closed the border to Kurds who wanted to help the defenders of Kobani, a city in the northern, Kurdish-majority part of Syria - a siege that lasted four months and ended in an IS defeat.

He wanted to see the overthrow of Syria's President Bashar al-Assad, an Alawite (Shia) ruling a mostly Sunni country, and he didn't much care who the opposition were so long as they were Sunnis.

He also didn't want to see a Kurdish mini-state appear just across Turkey's southern border, so he preferred an IS victory over Syria's Kurds.

But his priorities changed after he lost the June election.

Now his own power was at stake, and to keep it he needed a crisis.

In fact, he needed a war.

Assuming the AK Party would not only win its fourth straight election this year but gain a two-thirds majority of seats, Mr Erdogan moved on from 10 years as prime minister and got himself elected president last year.

The presidency is a largely ceremonial office, but with a two-thirds majority he could change the constitution and make it all-powerful.

But his party didn't get a two-thirds majority in the June election.

The main reason was that the HDP, a party demanding that Turkey's one-fifth Kurdish minority be treated as equal citizens in every respect, including language, managed to get into parliament.

The Kurdish votes were not coming back to the AK Party, and the only other possible source were the ultra-nationalists who had been alienated by his peace talks with the PKK.

(The talks began and the shooting stopped four years ago, although the official ceasefire was only declared in 2013.)

Now he needed to restart the war against the PKK, and that would be most unwelcome to his American allies.

He solved the problem by saying he would attack IS and other ''terrorists'', which got Washington on board - but since the Turkish airstrikes began in August, they have hit 20 PKK targets for every strike against IS.

It's not even clear that Turkey has finally shut its border to IS volunteers.

The PKK is fighting back, of course, but IS has not been appropriately grateful that Turkey is only bombing it (quite lightly) for diplomatic reasons.

It is almost certainly responsible for all three mass-casualty attacks using suicide bombers in Turkey this year.

There is only one consolation in all this: Mr Erdogan's electoral strategy doesn't seem to be working.

A poll last month showed 56% of Turks hold him directly responsible for the new war.

The polls also show AK's share of the vote falling, and that of the HDP rising.

Mr Erdogan is facing defeat, and he richly deserves it.