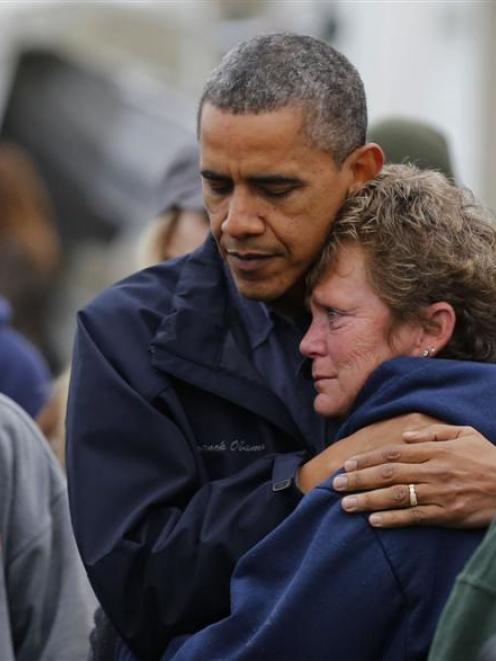 President Barack Obama hugs North Point Marina owner Donna Vanzant as he tours damage done by superstorm Sandy in Brigantine, New Jersey, on October 31. Photo from Reuters.
It's hard to know how much impact New York Mayor Michael Bloomberg's comments about climate change after superstorm Sandy had on the US election.

It is easy to overestimate that sort of thing, but President Barack Obama's victory in several states was so razor-thin that Mr Bloomberg's last-minute intervention may have been decisive. What is crystal clear is that Mr Obama himself did not want to talk about it during the campaign.

Mr Bloomberg, responding to the devastation he saw in New York City, laid it on the line. "Our climate is changing. And while the increase in extreme weather we have experienced in New York City and around the world may or may not have been the result of it, the risk that it may be ... should be enough to compel all elected leaders to take immediate action."

The New York mayor, a former Republican, did not hesitate to assign praise and blame: "Over the past four years, President Barack Obama has taken major steps to reduce our carbon consumption, including setting higher fuel-efficiency standards for cars and trucks. Mitt Romney, too, has a history of tackling climate change ... He couldn't have been more right. But since then, he has reversed course." He said this only five days before the election, in the immediate aftermath of a national calamity that may well have been climate-related. So did Mr Obama pick up the ball and run with it?

Certainly not. Apart from a one-liner about how climate change "threatens the future of our children" in a single speech, he remained stubbornly silent.

Rightly or wrongly, Mr Obama and his team have been convinced for the past four years that talking about climate change is political suicide. Nor did he actually do all that much: higher fuel-efficiency standards for vehicles was his only major initiative.

And Mitt Romney, of course, said not a word about climate change: you cannot take this problem seriously and retain any credibility in today's Republican Party. So was all the instant speculation about how superstorm Sandy might finally awaken Americans to the dangers of climate change just wishful thinking?

Mr Obama faces a daunting array of problems as he begins his second term: avoiding the "fiscal cliff", restraining Israel from attacking Iran, tackling the huge budget deficit, and getting US troops out of Afghanistan. But the biggest problem facing every country is climate change, and he knows it. Otherwise, he would never have appointed a man like John Holdren to be his chief scientific adviser.

Dr Holdren, a former president of the American Association for the Advancement of Science, is one of the leading proponents of action on climate change. He is also savvy enough politically to understand why Mr Obama could not do much about it during his first term, and he did not flounce out in a rage when the president avoided that fight.

Mr Obama rarely start fights he cannot win, and it was clear from the day he took office in 2009 that he could not get any climate-related legislation through Congress. That is why his fuel-efficiency initiative was his only first-term accomplishment on this front: that did not require legislation, and was done as a regulatory initiative by the Environmental Protection Agency. To what extent has his re-election changed this equation?

Second-term US presidents, who no longer have to worry about re-election, often act more boldly than in their first term. The US economy is clearly in recovery mode, and Mr Obama will (quite justly) get the credit for that. That will give him more leeway to act on other issues, and the environmental disasters of the past year may finally be pushing American public opinion towards a recognition that the threat of climate change is real.

There is not yet any opinion-polling data on that, but it would not be surprising. This year has seen meltdown in the Arctic, heatwaves that killed more than 10% of the main grain crops in the United States, big changes in the jetstream (which may be responsible for the prolonged high-pressure zone that steered superstorm Sandy into New York), and then the fury of the storm itself.

It has long been argued that what is needed to penetrate the American public's resistance to the bad news of climate change is a major climate-related disaster that hurts people in the United States. Even if Sandy may not have been a direct consequence of global warming, it fills that bill. It may get the donkey's attention at last.

There is no guarantee of that, and each year the risk grows that the average global temperature will eventually rise by over 2degC and topple into uncontrollable, runaway warming. Moreover, the Republicans still control the lower house of Congress. But hope springs eternal.

The past two weeks have seen an unexpected and promising conjunction of events: a weather event that may shake the American public's denial of climate change, and the re-election of a president who gets it, and who is now politically free to act on his convictions. As Businessweek (a magazine owned by Mr Bloomberg) put it on last week's cover: "It's global warming, stupid."