Voting system must be reconsidered 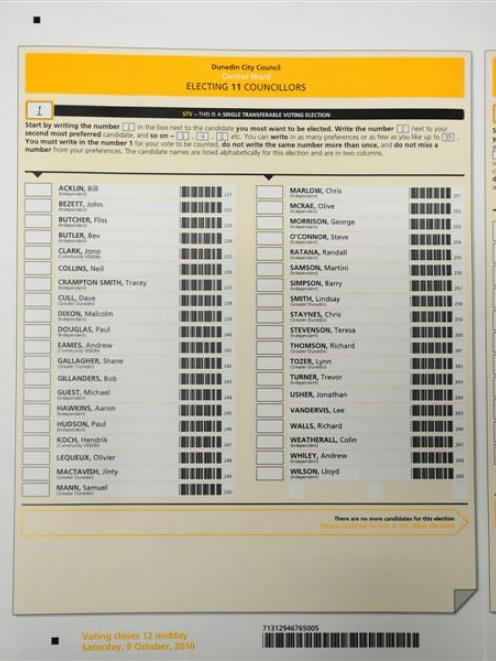 A Dunedin City Council special voting paper. Photo by Craig Baxter.
It's time for another look at the way we elect our city council. The single transferable vote (STV) system is producing results that are not in line with the will of the people, and parts of its administration are dangerously undemocratic.

In theory, the goals of the STV system seem admirable, but in practice the problems are are too many for it to be allowed to continue.

Dunedin is one of just a few local bodies using STV. The 2004 decision to change from first past the post (FPP) was hard-fought and narrowly determined in a poll demanded by the citizens. Just 51% of a 44.3% turnout voted for the change.

The main argument in favour of STV was that proportional systems like STV and MMP enable the election of a fairer representation of a cross-section of the community.

The other side of the argument was that STV would prove to be far too complicated to work effectively and the system was never designed for situations like New Zealand's local body politics, where party affiliations usually play a relatively minor role.

The Green Party was a big supporter of proportional representation systems. The late Rod Donald famously compared STV to buying a Lotto ticket, which, he said, clearly most New Zealanders could manage.

Experience has proved him wrong. There's a large gulf between buying a Lotto ticket and voting effectively under STV.

The contest for the 11 seats in the central ward of Dunedin city in 2010 illustrates the problem. Despite advertising campaigns and screeds of instructions, public knowledge of what voters were supposed to do with their ballot papers remained at a very low level.

Confronted with a list of 39 names, what did you have to do? Number 1 to 39? Number 1 to anything at all? Put a tick beside everyone you liked? Any or all of the above? There was even less knowledge of how to vote strategically to get the people you wanted and eliminate the people you didn't want.

Advice and comments were offered by a range of contributors to this and other newspapers. Many of the writers demonstrated they had no idea how votes are actually calculated and did not understand the complex interconnectivity of each vote under STV.

Before the election, it was clear to many candidates and their supporters that there was a widespread demand for change in the governance of the city. Yet the election resulted in very little alteration in the makeup of the council.

Why was it so difficult to effect the changes the people seemed to want? In my view, it was because the system is too complicated for voters to use properly and because it incorporates biases.

Most informed voters, with their own agendas in mind, no doubt allocated their top numbers to the names they knew. Thus the demand for change was reflected in the fact Dave Cull, as the well-known face of the new group seeking change (and of course as a mayoral candidate) topped the council voting.

Second came Richard Thomson, prominent and respected for his battling role in health. Other high-profile candidates, such as Lee Vandervis and Bev Butler, drew early attention, either positive or negative, depending on the stance of the voter.

A significant number of electors gave their top numbers to candidates who were seen as representative of identifiable groups such as Greens, students, Maori and Sort the System.

But once the known and preferred names were taken care of, it seems many people, informed or otherwise, either stopped numbering or kept adding numbers by working their way down the page and giving sequential numbers to the names they recognised. This, of course, tends to favour existing councillors.

Starting at the top of the page and working down is a process as natural as breathing, and it means the order of listing is a hugely important factor.

I believe the results show alphabetic voting was common. There is a clear trend that favours the names nearer the top of the list. The elected council itself had decided, though not unanimously, that candidates should be listed alphabetically, rather than randomly.

To achieve a result, STV relies totally on the rank ordering of the candidates. Ranking of individuals is a haphazard, unreliable and, in this case, irrelevant procedure. Since I live in the central ward, my right and responsibility is to elect the 11 people I think are best equipped to run the city for me. I see no point in rank ordering the 11 I want elected, let alone going down the list perhaps as far as number 39.

The average voter (there were 33,906 in the central ward) in fact ranked fewer than 10 candidates, while 1068 determined punters went all the way to 39. How on earth they differentiated between the virtual unknowns in the bottom quarter of the list is a mystery, although sitting councillor Michael Guest was rewarded with the highest number of 39th placings of any candidate.

When you add to all those complications the fact two different voting systems were operating on the same voting form - FPP was used for the Otago Regional Council - it's no wonder 1230 votes were not able to be counted at all.

And even if the majority of voters really understood the system, it wouldn't produce quite the council the voters wanted. In this election, the complicated way votes are counted, redistributed and in some cases discounted worked against some candidates who were seen by a sufficient number of voters as solid, worth a place on the council but not usually ranked in the highest numbers.

It has been enlightening to take a fresh look at the election results. Reworking the available numbers by counting the first 11 votes on each voting paper, which is almost the same as converting the election back to the old FPP system, you get a different outcome, one that more accurately reflects what the central ward voters wanted as their first 11.

Nine of the 11 who were elected would have got in under any system. But the other two places would have been won by Lynn Tozer and Chris Marlow, at the expense of sitting councillors Bill Acklin and Paul Hudson.

Ms Tozer, for example, was more than 700 votes ahead of Mr Acklin in a first past the post count. However, under STV, Mr Acklin and Mr Hudson, despite having fewer voters, moved up through the redistribution process because the votes they did get tended to carry higher rankings.

The other problem, a major one about which a democratic society like ours should be truly alarmed, is that the system is not at all transparent. Only with great difficulty and some reasonable computing skills can the public get any picture at all of why the voting ended up the way it did.

If the outcomes run against intuition or expectation, there is, as Bev Butler found out, nothing you can do about it except be willing to spend the thick end of $100,000 to buy a recount.

Incidentally, no-one seems to have asked asked why it would cost so much. A public explanation would be a fine thing here.

But the whole data-entry and software system is a "Trust me, I know what I'm doing" situation: we are assured it has been tested, is foolproof and cannot possibly be interfered with or used to alter outcomes in any way. That may be so, but how do we know?

And in the event of a recount, if the second set of figures differed from the first, which version would be more likely to be right? Both counts would have been done in the same way. It's a disturbing situation when a private company, Electionz.com, appears to hold the rights to the only software that can be used to count the votes and produce the results.

The Department of Internal Affairs claims it developed the system. Who owns it now? How did the private company come to be in a monopolistic position to profit from it?

So in summary, what's the argument for STV? It's supposed to make councils more representative. In the election of councillors for the Dunedin City Council central ward, with only one exception, it didn't do that. Basically, it replaced one elderly male with one young female. So STV failed for the large ward. And in the other two ward elections and the mayoral contest, it made no difference.

The solution is a return to first past the post, with randomised order of candidates' names on the ballot sheet. Full randomisation means every voting paper is different, eliminating the effect of the top-of-the-page syndrome that is otherwise inevitable when 39 candidates are seeking 11 seats. The debate needs to start now.