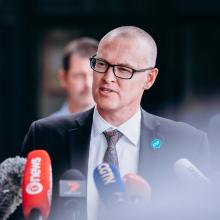 David Clark. PHOTO: RNZ
On Monday, as a hypothetical exercise, blogger David Farrar imagined who would be in a ‘‘Government of National Unity’’ created to deal with the Covid-19 pandemic.

While we have not got to that point yet, this was not fanciful or mischievous musing.

A national coalition Government was formed in 1915 to provide a united front during World War 1, and was still in power when the Spanish influenza pandemic swept across New Zealand.

Prime Minister Jacinda Ardern has said, at this stage, the September election will go ahead as planned.

If public health advice were for it to be postponed the Electoral Act allows for that possibility.

The chief electoral officer, after consultation with the Prime Minster and leader of the Opposition, can defer an election by an initial period of no more than three days, and one or more subsequent periods of no more than seven days each, in ‘‘unforeseen or unavoidable disruption’’.

Helpfully, the Act defines just what that is; an epidemic notice being in place is one of the criteria.

Rather than a rolling maul of postponements, a caretaker Government of all parties until an election was possible could be a wise move, both politically and administratively.

But back to Mr Farrar, who to try to balance party numbers in his imaginary Cabinet opted to move Health Minister David Clark from his portfolio and replace him with National’s Michael Woodhouse.

This seems extraordinarily unlikely — in a health emergency that is the one portfolio the governing parties would certainly not relinquish.

If such a unity Government did come to pass, it is not beyond the realms of possibility the Dunedin North rivals could share the portfolio; two health ministers would signify a unified political approach and befit the magnitude of this.

The two men know each other well, and have a perfectly civil relationship; it is not a stretch to imagine them working together.

Ms Ardern has said several times in recent days that New Zealand’s response to Covid-19 should be above politics.

If by that she means scoring cheap points at the expense of sick people, few would argue; but if she means the Opposition should refrain from asking questions about the Government’s handling of the crisis that would be far too far.

Mr Woodhouse, apart from the occasional shrill-sounding moment, has made a strenuous effort to ask focused questions about whether enough has been done fast enough, and whether measures have been effective.

In contrast to a ghastly performance from his party leader on Tuesday in responding to the Government’s emergency economic package, Mr Woodhouse welcomed a more energetic response from the Government but raised pointed and reasonable questions about the testing regime and whether protective measures were being rolled out with enough alacrity.

Quite apart from the fact that those questions mirror much of what people have been saying on social media and talkback, it can be argued that the Government’s rapid shift in gears this week to clamp down on travel, impose quarantine restrictions and ban large gatherings, indicate Mr Woodhouse’s concerns had some validity.

Likewise, Finance Minister Grant Robertson’s financial relief package announcement on Tuesday is something his National opposite Paul Goldsmith has agitated for.

The Opposition can, and arguably should, have a role to play in the Covid-19 response, and the Government is slowly edging towards recognising that.

While a national coalition Government as formed by the Reform and Liberal parties during World War 1 seems unlikely, a ‘‘Covid-19 Cabinet’’ along the lines of the War Cabinet New Zealand had during World War 2 is not unimaginable.

If not a Cabinet, a cross-party Covid-19 committee with each party’s health and finance spokesperson appointed to it, might be a useful tool in the months it will take for this emergency to be dealt with.

Labour, which remembers the boost to his fortunes John Key received when he worked with Helen Clark to progress the ‘‘anti-smacking’’ legislation, may not wish to offer similar elevation to National in an election year.

However, as Ms Ardern and Mr Robertson have said, we are all in this together ... and ‘‘we’’ includes the National Party.

For the country’s Covid-19 response to truly be above politics, the Opposition should play a greater role in it.

There is not a lot of comedy in Covid-19, but Mr Woodhouse inadvertently found some last week when quizzing Dr Clark about measures taken following a possible case at a Tool concert.

‘‘Has he ever been in a mosh pit?’’ Mr Woodhouse asked Dr Clark, before following up with ‘‘Has he seen reports that mosh pits are hot, sweaty, close contact situations that can last for hours and, in an upcoming event, will go all night?’’

At which point, with a range of double entendres left hanging and the House in helpless laughter, the Speaker swiftly moved on to the next question.

Social media and Talkback are conduits of partisan, disaffected opinion, reluctant to get with any programme.