Natalie Russell sent in this photo of a get-together on St Kilda Beach at the weekend for golden retrievers and their owners. About 30 dogs turned up. PHOTO: NATALIE RUSSELL
I'm not planning on delving into politics again today, but thanks for the calls and emails expressing similar sentiments about the lynch-mob approach to Dunedin South MP Clare Curran's departure from Cabinet.

It would be good if the bullies take note of it, too. I'm sure National's Melissa Lee has never made a mistake in her life.

Just when you think you've seen it all in terms of the most ludicrous, platitudinous, meaningless bollocks, something new always comes along.

I thought people "reaching out" to me from my email inbox was bad enough. Until I received this gem of absolute codswallop the other day.

"Wanted to bubble this up on your inbox in case you missed the email I sent you a couple days ago regarding the ... Would love to hear what you think." 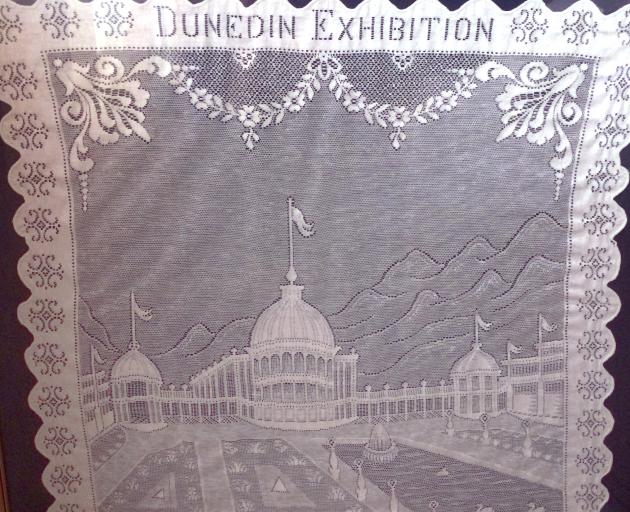 Regarding the 1925-26 Dunedin and South Seas Exhibition, Mary Hay says her husband ``came home with a bundle of cloths he had bought at a garage sale - when I undid them, I found this lace souvenir in perfect condition''. PHOTO: MARY HAY
Name and address withheld to spare the blushes.

You want to hear what I think? Nice to be asked, but I'm not sure the person really wants to know that about the writing in this email.

However, in a "reaching out" kind of way, I'm happy to pass on I am a fan of bubbles, but in bubble baths, not in emails. If that helps?

Daphne McLay, of Alexandra, emails with her memory of the huge event at Logan Park and a photo of what the family took home.

"My dad used to tell me of attending the exhibition. He was born in 1908 and was an apprentice at the Hillside railway workshops and would have been 17 years old at the time of the exhibition.

"The numbered souvenir cup is very beautiful, made by Aynsley's in England. On the inside of the cup is written `The Cup of Knowledge'. This would have been a prized possession in the Clark family, as it now is in mine."

Back to the snow

"I was three months old and the story goes that my dad used to have to battle the snow to get milk to feed his first-born. We did live in St Clair, so maybe it would have been a bit less effort than the hill suburbs, but milk deliveries could not be made."

John Galloway, of Waihola, writes of the "real big snowfall of '39, not just these more recent light, white dustings".

"My father, who was over six feet tall, built a manuka garden archway, and I vividly remember, as a 6-year-old, riding astride it, as you would a horse, and kicking my feet in the snow on either side.

"Also, finding the dog kennels to dig them out, relying on small breath-holes in the snowy expanse.

"Weeks later we helped a neighbour drag his car down a farm track through trees to avoid snowdrifts still blocking the road cuttings.

"No snuggling up to the heat pump - electricity hadn't even arrived at our home. That was a real snowfall - no talk of global warming then!" 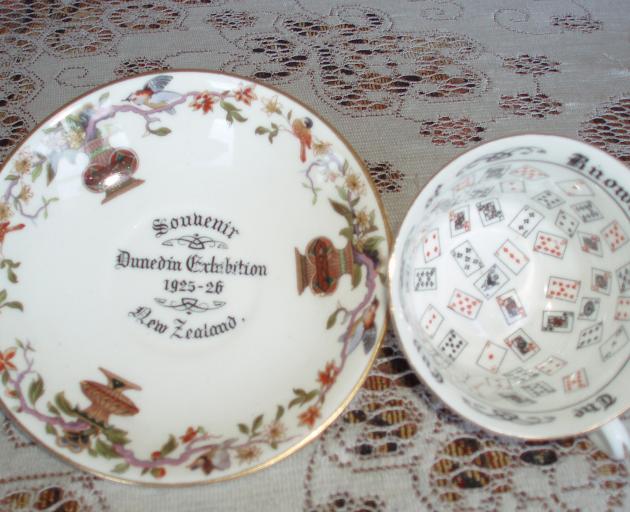 Daphne McLay's father went to the exhibition and the family came back with this souvenir crockery. PHOTO: DAPHNE MCLAY
Graeme Donaldson, of St Kilda, was a "tiny tot" first-year pupil at St Bernadette's School during the 1939 snow.

"At my grandfather's house in Bathgate Rd, the snow was up as far as the window sill - about four feet (1.21m). My granddad had to use a spade to clear the snow from the kitchen door to the front gate.

"The lounge window was open only a few inches, but that was too much for the pet budgie. He was found prostrate in his cage.

"Granddad opened the door of the coal range and placed the loved budgie in there to revive him. However, his name was not Lazarus and he had to be buried."

Richard, of Dunedin, emailed about another snow, in 1969.

"I'm quite surprised that this hasn't rated a mention yet. From memory, it was in October and heavy enough to close our school (Mornington) for three days. It was spoken of as the heaviest since 1939."

I took the liberty of checking this one out in the ODT vaults. There were two snows in Dunedin in October 1969 - one on Thursday 9th and Friday 10th, and another at Labour Weekend, on Sunday 26th and Monday 27th.

Clare Curran has been known to stick the boot in on the odd occasion across the parliamentary floor so don't buy into this "she was bullied" argument.

At nights, she was one of the few in the House. The PM at the time was Out, to avoid questioning.

By the way, who are you to tell a journalist 'not to' express opinion?