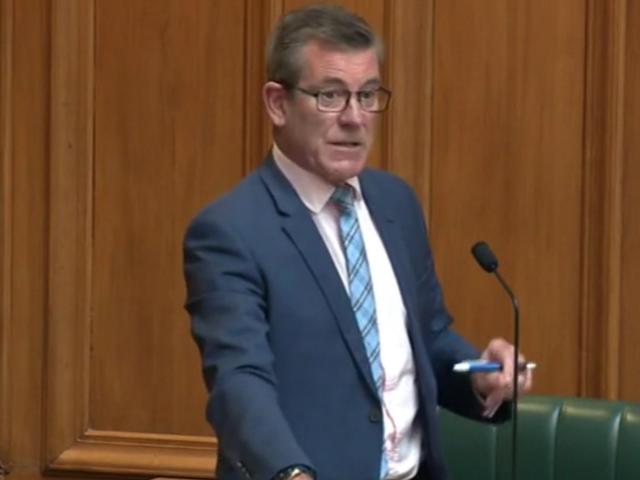 Dunedin National Party list MP Michael Woodhouse speaks in the general debate in Parliament on Wednesday. PHOTO: PARLIAMENT
There is no set formula for deciding which of our local MPs feature in Southern Say each week.

Generally, it will be dictated by a pressing local issue being in the political sphere of action that week, or a major event happening in a portfolio or an electorate.

Should nothing obvious be going on, the focus will then usually turn to an MP who has not been in the spotlight for a while, both for balance and to see if they have been up to anything ... or not.

This week was an easy one though; as the only southern MP who actually made it to the Delta Parliament on Tuesday, Dunedin National list MP Michael Woodhouse ‘‘wins’’ by default.

Just the fact Mr Woodhouse burst his bubble and got to the capital at all is worth some serious thought.

Both National and Act New Zealand were adamant that Parliament needed to resume face-to-face this week, while Labour was equally as strenuous in its assertion that an online gathering was possible and preferable to watching MPs and Speaker Trevor Mallard — who still has not mastered the art and seems to have given up — wrestling to take their face masks off before speaking.

Either option was going to be complicated as the standing orders, (Parliament’s rule book) were not written with precisely this situation in mind.

Both sides of the argument were on a hiding to nothing, given each agreed Parliament did actually need to meet in some form.

Demand it be in person and you run the risk of looking precious and self-important, say being in the chamber is not that vital and you risk undermining the importance of Parliament by inferring it is an institution which can be dispensed with or something which can be done by going through the motions.

For Mr Woodhouse, who last week was named National’s new shadow leader of the House, this was something of a baptism of fire.

The position involves considerable liaison with the Leader of the House (Chris Hipkins), other party leaders and the Speaker to ensure Parliament runs smoothly, and there was a difference of opinion about the why before the respective parties even got to the how.

For all Labour’s grousing, especially on Tuesday, that they did not need to be in the House, the various lines of questioning by Act leader David Seymour, Mr Woodhouse, his leader Judith Collins and National’s Covid-19 response spokesman Chris Bishop were valid inquiries.

There are genuine questions for the Government to answer about how well managed or otherwise its vaccine rollout has been, how prepared it really was for the ongoing Delta variant outbreak, whether its contact tracing system is really up to the demands this outbreak has placed upon it, and whether the alert level framework has been the best tool in the Government’s box at this juncture.

Mr Seymour repeatedly asked this week if the South Island should still be at Level 3, and in doing so echoed the thoughts of many.

But equally, Prime Minister Jacinda Ardern was speaking for many when she said it was too soon to have Southerners wandering around the motu when there might still be undetected cases of Covid-19 in the community.

It was an important debate, and each got to make valid points.

Hindsight is always 20:20 but, crossed fingers, no-one seems to have contracted Covid-19 through the parliamentary process, so the added scrutiny the Government was subjected to probably did more good than harm.

For Mr Woodhouse, whose transport portfolio was transferred elsewhere in the National reshuffle, the unusual sitting week gave him a rare opportunity to ask two questions in his now sole spokesmanship area, finance.

On both Tuesday and Wednesday, Mr Woodhouse’s focus was on government spending.

Mr Woodhouse is convinced that a) the Government has been spending its Covid-19 relief fund on things other than aiding people through the pandemic, and b) the fund is almost all spent already.

Finance Minister Grant Robertson, of course, denied any such thing, firing back that National simply wanted to fund tax cuts and its pet transport projects.

Mr Woodhouse will have felt he got his point across on Wednesday by asking if an art documentary based on Papua New Guinea tattoo practice and revival was Covid-related, but Mr Robertson will have felt equally as pleased at being given the chance to offer a ringing endorsement of the importance of the arts in response.

Mr Woodhouse’s presence in the sparsely attended House offered mute testimony to his elevation in National’s thinking, even if his official ranking remained the same.

It will be interesting to see in the coming weeks if a new shadow leader of the House means a new approach to Parliament by National.

I see you and raise you

Mr Woodhouse put his money where his mouth was, not once but twice, on Wednesday.

First, he said he accepted Napier MP Stuart Nash’s bet of a case of wine that New Zealand’s Covid-19 vaccination rate would be 90% by year’s end, and then he doubled down.

‘‘I bet one bottle of wine that this time next week we are going to be in the House debating a second imprest supply Bill where the Government is asking for more money,’’ Mr Woodhouse said.

Ms Simmonds’ youngest daughter has Down syndrome, her interest and activism in this area is, understandably, longstanding, and this should be an important and valuable role.

And it shall be recorded how selfish Nats & ACT were to force the risky farce on the govt. If we had a Zoom type parliament we could have heard everyone. I watched Parliament TV this week and it was a waste of space. As per usual, Jacinda spat Collins out for dust & then Collins made a fool of herself on top of that.
Folks I read many political comments from readers about parliament - based n what you read. It is worth actually watching them live before commenting. You will find your views change!

Symbols are important in any society and in times of crisis the symbolism of parliament sitting to debate the issues is a top priority. So I agree with crusher Collins in her call for this to happen.
I also congratulate mike houlahan for his balanced approach to the issues that should be addressed by parliament. In particular the vaccine rollout. Houlahan said the govt needs to be questioned on the efficiency of the rollout, on whether better results could have been achieved. He has discounted crusher and seymours bleating of “failure” and sensibly stated that the govt needs to demonstrate that what had been achieved was the best result in all the circumstances. Excellent reporting.
Although the ODT does not always get these things right they have this time and it is what makes them a superior newspaper to the likes of granny herald and the ubiquitous Stuff.

Symbols are for moon worshippers. Parliament is NOT a symbol. What you clearly are not aware of is Jacinda offered a full Zoom sitting that EVERY MP could have partaken in and we could have all watched. Do you think that is not as democratic as the farce of 8 MPs ?? It seems to you that the building makes the govt not the people.
Do you not consider that what Collins demanded was selfish and put parliaments staff at risk??
As for journalists questioning of any governments – there comes a balance where mostly nowadays they are just trying to boost newspaper sales and some lines of attack on the govt can do harm for society. There is much info the govt cannot impart, often sub judice. But no he journos get a prize for breaking news.
The rollout is going fine. Now I work in the health field with vaccines. You are NOT criticising the govt – you are criticising us workers. We are doing the rollout not the govt. Leave us to do our amazing job.
The question that you should really be asking is - how would Collins have handled Covid ??? ROFL well not funny actually. Open borders to Asia, massive deaths, hospitals unable to cope, but businesses fully open and running