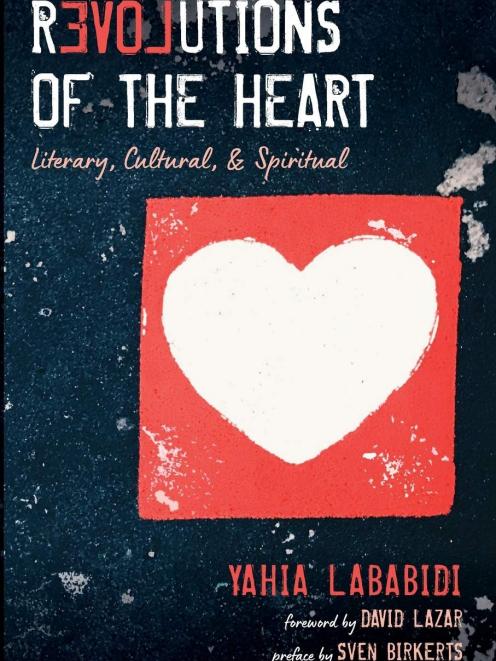 Revolutions of the Heart by Yahia Lababidi. PHOTO: SUPPLIED
Last year, while working for The Oxford Research Centre in the Humanities (TORCH), I ran a number of poetry, writing, and art competitions.

One entry, a poem titled Corona Verses by Yahia Lababidi, caught my eye.

The poem begins: "We can’t simply return to how we were after a crisis — / our homes have become cocoons for radical transformation." Yahia’s words still echo in my skull, and over the past year, we’ve become friends.

Yahia Lababidi is an Egyptian-American poet and writer.

The author of two critically-acclaimed books of aphorisms, Signposts to Elsewhere (2019) and Where Epics Fail (2018), Lababidi has also penned four books of poetry and prose, including The Artist as Mystic (2017) and Balancing Acts: New & Selected Poems (2016). His latest literary offering, Revolutions of the Heart (2020), is a true gem. It is in some ways a followup to his first essay collection, Trial by Ink: From Nietzsche to Bellydancing (2010).

Revolutions of the Heart is a stunning collection of essays, aphorisms, conversations, interviews, poems, analyses, and reflections. Wide-ranging and multifaceted, this book combines literature with philosophy, social activism with mysticism. Revolutions discusses Islamophobia, American popular culture, the inner truth of art, and myriad other topics. The book is also a deeply personal study of Lababidi himself.

My favourite aspect of Revolutions of the Heart is Lababidi’s conversations with other writers and thinkers, on topics ranging from poetry to meditation. One such conversation with Brian Chappell tackles Yahia’s brilliant aphorisms. For those unacquainted with the notion, an aphorism is a pithy observation which contains a general truth. Yahia describes his aphorisms as "what is worth quoting from the soul’s dialogue with itself". Yahia began unburdening himself in one-liners as a teenager, and it is the form that he finds himself returning to when he’s at his most concentrated. While I do not believe that one sentence can encompass the world, Yahia’s aphorisms are certainly small, gold nuggets of truth and wisdom.

Inspired by such conversations, I reached out to Yahia to ask him a series of questions I have been pondering recently. As a writer myself, I am always intrigued by what prompts someone to pick up a pen and write in the first place. Yahia grew up in a fairly creative household that sometimes doubled up as a sort of literary salon. His paternal grandfather, Yahya Al-Lababidi, was a celebrated poet and something of a national treasure in Lebanon and Palestine. "So," he muses, "I suspect such artistic gifts are passed on in the bloodstream ..."

From an early age, he read voraciously: "First, to escape the confines of a too narrow reality, then in an attempt to intensify consciousness and squeeze existence for answers." I can relate when he talks about books being a gateway to other realities: "hallucinogenic drugs, self-medication, friends, family, and teachers."

I really enjoyed Yahia’s essay Every Subject Chooses Its Author, in which he writes about "literary seances"; namely his relationships with poets and thinkers long dead. "The act of writing for me began," he says, "around three bewildering decades ago, as a conversation with my literary mentors. This took the form of scribbled responses in the margins of books, talking back to the authors I was reading at the time — Gibran, Wilde, Eliot, Kierkegaard, Pascal, Kafka, Dostoevsky, Nietzsche, Rilke — which, eventually, became my own books of aphorisms, essays, et cetera ..."

I’m reminded of my own dog-eared and scribbled books, full of pencil markings, vigorous underlining, and highlighted passages.

The theme of transformation runs through Revolutions of the Heart. Yahia comments: "In Revolutions, I find that as a person/writer, I’m undergoing an inner change, just as the world around me is shape-shifting: the Egyptian Revolution and its aftermath, American popular culture and its contortions, as well as much else in our complex modern world."

On a personal level, the book charts his evolution from angst-ridden existentialist thinker, besotted with the life of the mind, to someone chastened, drawn to Sufism and seeking to surrender before the primacy of the life of the Spirit.

On the political level, Revolutions is concerned with hope and healing, arguing for nuance and compassion, as it attempts to present art as a form of cultural diplomacy and tool for transformation.

"The title," Yahia says, "with its emphasis on the heart, seeks to collapse the false distances between the personal and political, by suggesting that no revolution is successful, lasting or meaningful without addressing our spiritual dimension, or evolution."

In the past, I have written about the myth of the tortured artist and the question of whether pain and suffering is necessary for the creation of true art. I personally believe that art often arises from the profluence of great emotion, be it sadness, joy, or love. Yahia concurs, although in his personal experience, suffering has led to great beauty and the stretching of his creative capabilities.

"I do believe that we are granted insight, clarity, vision and other subtle gifts in relation to our suffering. If we endure necessary pain —with grace, dignity and nobility— I believe that our art and lives benefit from it. I don’t mean to fetishise pain in any way, but I do feel that the punishment for avoiding suffering is superficiality, while the reward for embracing it is spirituality."

He concedes: "Which is not to say that one should flirt with disaster, lest it decide to commit."

Our conversation ends with me asking how Yahia’s experiences as a Muslim and immigrant in America inform his writing and creative processes.

"When I washed up on the shores of Miami, over 15 years ago," he says, "I didn’t think such specifics of my identity mattered much. Rather, I felt I’d exhausted my possibilities back home, in Egypt, and was looking to start a new life." But over the past decade, he has come to realise his responsibility to speak up, "on behalf of those without a voice, marginalised or oppressed."

Revolutions of the Heart does just this, appealing to the high side of our shared humanity through art, and locating the artist as an activist.