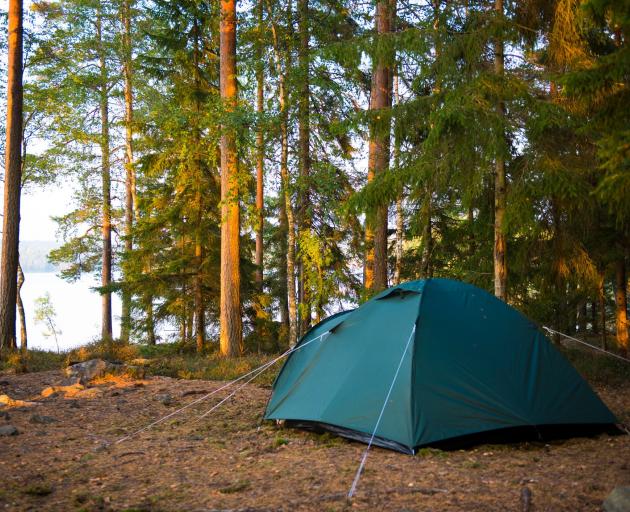 A mountain hike and a night in a tent allows a break from the onslaught of absurdity in the news, but it’s still there when you get home. PHOTO: GETTY IMAGES
Despite my myopia, my hindsight is always 20/20.

And so it was last week when I was puffing and panting in the almost noon day sun on a gradually rising track.

Yes, I was too hot, and wearing two pairs of socks (my boots are on the large side) and a sunhat didn’t help. I am such a hothead I cannot tolerate hats even in mid-winter.

But enough of the excuses. I wasn’t fit enough. Maybe my daughter-in-law wouldn’t have been about to switch into full nursing mode if my build-up to the excursion had involved more than preserving 10kg of Black Doris plums while wearing my tramping boots and clambering up and down the stairs at home with my laden pack.

Embarrassingly, I had to be relieved of my pack for the last part of what was a short walk in the great outdoors.

Apart from that hiccup, it was bliss to be spending one night in a tent and two in a hut, away from the tedium and turmoil of the outside world.

The Matiri Valley girl in me loved the security of being so close to mountains and even the occasional rumble of an avalanche in the distance was strangely reassuring.

You know you are in the first world when you find it liberating that your main concern is ensuring sufficient boiled water for drinking and dish washing for our party of five adults and two babies.

When we strolled out last Wednesday, I felt refreshed and invigorated, despite three nights of broken sleep.

And in a moment of magical thinking which I can only call mountain madness, I half expected the outside world might be a better place when we tuned in. It wasn’t, of course. Russia was still waging war in the Ukraine, and closer to home, protesters and the police were facing off in the inevitable final showdown at Parliament.

While there had been many attempts from those within the tents to portray the group as consumed with peace and love, there were too many actions which were anything but.

And while they were supposedly all about freedom, they did not seem to grasp they were impinging on the freedom of some Wellingtonians to go about their daily lives.

It was easy to find bonkerism, including the woman convinced her pet lamb had died because it was touched by someone who had been with someone who had been vaccinated, and those who blamed what were likely Covid-19 symptoms on a radiation device being directed at them by the Government.

Not all of those at the protest will have shared such nuttiness or been calling for the execution of politicians and journalists, but the tolerance for extremism tarred everyone.

The refrain from protesters about just wanting to be heard became bizarre. Weren’t we hearing from them all the time? Some mainstream media made the questionable journalistic decision to livestream the event for hours on end (and if you tuned in to it, it was mostly pretty damn boring). Didn’t this risk giving the protesters more gravitas than they deserved?

When the protest is investigated, I hope the hindsight will extend to an examination of why there was no allowance for a proper, even if truncated, public consultation process before measures such as vaccination certificates and "no jab no job" policies were introduced.

Although the recent High Court decision deeming mandates for police and the defence forces unlawful may remain contentious, it highlighted the confusion around the justification for those mandates at the time they were introduced.

A public consultation might have resulted in greater clarity about what was expected to be achieved by vaccine passes and job restrictions and how long they should remain. It could have explored the social and economic impact of the "them and us" situation and whether pushing some people further to the fringes of society was desirable. It might have also provided an opportunity to establish whether early deployment of rapid antigen testing might allow employers who introduced their own mandates on health and safety grounds to safely retain unvaccinated staff.

The consultation absence highlighted both the arrogance of the Government and the ineffectiveness of the Opposition, particularly National, which has been too focused on itself during most of this parliamentary term. (If cutting taxes is National’s one bright idea now, I have to wonder what light bulbs they are using.)

On the long ride home, I swigged at my remaining refreshing mountain water and pondered how we will ever develop critical thinking in those who find their community by hurtling down the misinformation/disinformation highway cynically sign-posted by big tech algorithms. When the water ran out I was no closer to knowing the answer to that, but I knew my holiday was over.