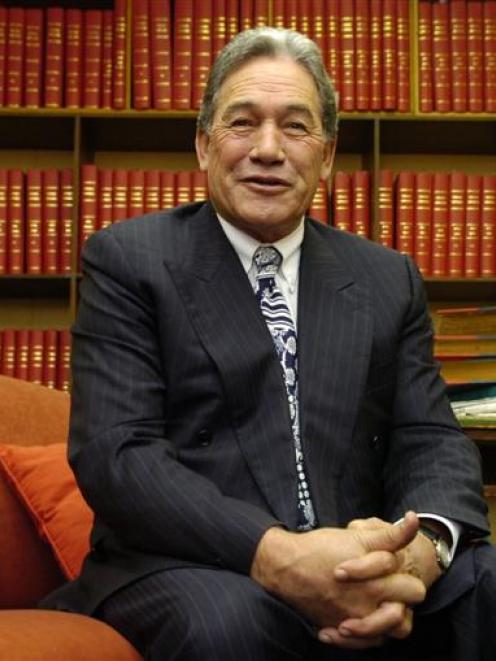 "This is the final step on the road to separatism. This is the road to Zimbabwe." - New Zealand First leader Winston Peters. Photo by Jane Dawber.
New Zealand First leader Winston Peters yesterday launched a savage attack on the principles of the Treaty of Waitangi as he battled to gain voter support in the last three weeks of the election campaign.

In a speech where he ruled out working with nearly every political party after the election, Mr Peters said the treaty was not a binding legal document.

"It cannot and must not be used in a constitution or indeed in any legislation apart from the specific cases that try to redress the worst excesses of colonisation."

The only party not mentioned by Mr Peters was Mana, led by Hone Harawira, and that is an unlikely option given Mr Peters' savaging of the treaty.

It was a change of game plan for Mr Peters, who once led a party which held all five Maori seats. Usually his election profile is lifted by campaigning around restricting immigration and curbing overseas investment.

This time, he has gone for restricting overseas investment, opposing the constitutional review of the treaty, as proposed by National and the Maori Party, and the repeal of the Foreshore and Seabed Act 2004 by the National-led government.

There was no public demand for a new constitution.

"People are not marching in the streets. Despite its human imperfections, the system that was set up to govern us is based on freedom and fairness. We do not need or want a system based on a well-intentioned, three-clause document signed in 1840."

The United Nations Indigenous Peoples Declaration was signed in the dead of night at the UN in New York. The people were never consulted, he said.

"It was a deliberate act by the National Party and the Maori Party. This declaration says that in a dispute over New Zealand laws, some New Zealanders' rights over-ride the rights of others. And in time, this is going to be written into our laws."

The Maori did not have democracy. They had a tribal feudal system and now the concept of that feudal system was sneaking into the foundations of a new constitution, Mr Peters said.

Mr Peters said the new laws surrounding the foreshore and seabed ownership issue was being sorted out behind closed doors and New Zealanders - non-Maori and Maori - had no say in the debate.

New Zealand First opposed the sale of state-owned assets, farmland and coastline to foreign interests. Profits were sucked out of the country and that became a permanent loss. Many things that a government did could be changed by another government, but not those.

"When our country has been sold, we will not be able to take it back without starting a revolution. When our democratic political and constitutional systems have been overturned and replaced with one based on the Treaty of Waitangi, our voices will be lost. When much of your foreshore and seabed has been privatised and divvied up in treaty claims, you will never get it back. It is lost forever."

New Zealand First would oppose any plan to privatise and sell New Zealand or create a state based on some mythical element of the Treaty of Waitangi, he said.