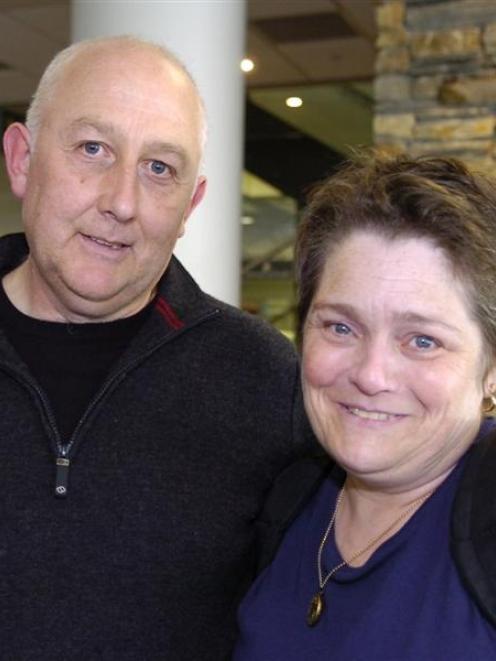 Mark and Sarah Stewart arrive back at Dunedin International Airport on Saturday after the Christchurch earthquake ended their dream holiday. Photo by Jane Dawber.
It was supposed to be a second honeymoon and trip of a lifetime for Dunedin couple Mark and Sarah Stewart.

The Christchurch earthquake ended those plans and Mrs Stewart was in tears soon after disembarking from Flight NZ5053 at Dunedin International Airport at 3.54pm on Saturday.

It was the first flight to Dunedin from Christchurch since the quake closed Christchurch airport, suspending all flights.

"It was supposed to be our second honeymoon.

"We were going for a 12-day trip to Vanuatu but, even if we could get there, we'd only get six days now," Mrs Stewart, an Otago Polytechnic staff development manager, said as she wiped away tears.

The couple was staying at the Sudima Hotel at Christchurch airport when the quake hit at 4.35am on Saturday.

"It was pretty scary. I thought it was a jet aircraft coming in or about to crash," Mr Stewart, a government worker, said.

"I've experienced earthquakes before, but nothing like this. It's by far the worst I've ever seen.

"I really thought the walls were going to come down.

"It was really violent.

"The paint was flaking off the walls in the room. There were cracks in the walls.

"Even the aftershocks were really frightening," he said.

"You don't know what to do. I just couldn't believe how scary it was," Mrs Stewart said.

"My first thought was our kids, who are skiing in Wanaka, but they felt nothing.

They were grumpy we'd woken them up to find out how they were.

"You see all those ads on TV about having an emergency pack ready with torches and batteries and things ... well, I'm going to do that now."

However, she still managed to find some humour in the situation.

"If we don't have a second honeymoon soon we're getting a divorce," she joked, looking at her husband.