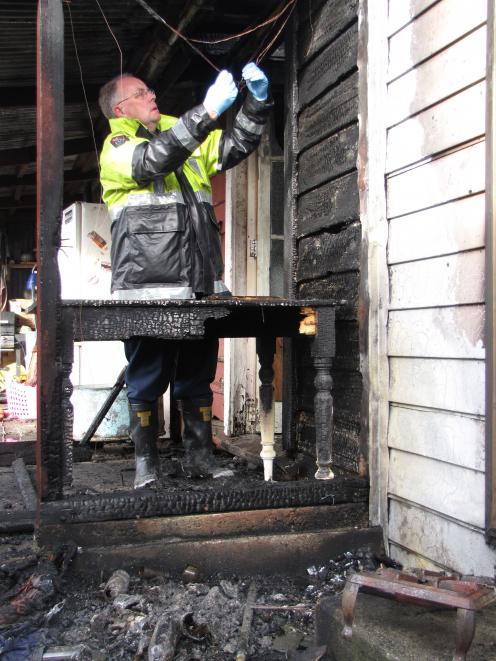 Fire safety officer Barry Gibson checks the wiring at a badly damaged house in Millers Flat after a fire on Sunday night. Photo by Sarah Marquet.
Hot ashes left in a wheelie bin caused a house fire on State Highway 8 next to the Millers Flat bridge on Sunday night, investigators have found.

Fire safety officer Barry Gibson, of Dunedin, said: "The fire was clearly started by ashes in a wheelie bin" that had been placed up against the side of a weatherboard house.

Sergeant Andy Reed said the house, which belonged to Contact Energy, was uninhabitable because of the damage, mainly to the back wall and the roof.

Firefighters had to take off "a lot of iron and timber" to vent the roof.

Contact Energy spokesman Jeremy Seed said the house "has been gutted so will likely be demolished".

Sgt Reed said the alarm was raised by a neighbour between 9 and 9.30 on Sunday night.

Firefighters were at the scene for "about two and a-half hours".

Volunteer firefighter Phillip Bently was at home when the fire broke out. He said he had heard four large bangs, and went to the door to find the house across the road on fire.

He met the occupant on the road. The occupant told him everyone was out of the house.

Sgt Reed said there were two occupants. The female, an asthmatic, was taken to Dunstan Hospital as a precautionary measure after suffering smoke inhalation. The male went to stay at a friend's house.

Sgt Reed said police had been unable to reach either person yesterday.

One neighbour said she heard a banging noise "like the sound of an axe hitting a block of wood".

When she went outside to see what was happening, she saw firefighters on the roof cutting a hole, backlit by "huge flames" that were a lot taller than the house, "taller even than the men standing on top of the roof".

Another resident said there was "loads and loads" of smoke that settled over the area.

There was a similar incident at a house in Ranfurly only three days earlier.

The occupants of that house were woken by their smoke alarms to find a bucket of ash left outside had ignited and set fire to the porch and the side of the house.

Mr Gibson said: "We are getting a lot of these fires now, which is causing us great concern. There are far too many house fires that are avoidable.

"People have to take responsibility for the correct disposal of ashes.

"They [ashes] can stay alive for five days, so people need to put them in a non-combustible container and, if necessary, wet them.

"We have also seen an increase in chimney fires this year. People need to clean their chimneys regularly, at least once a year, or more often if it is used all year round."

Attempts to contact the couple who rented the house were unsuccessful.