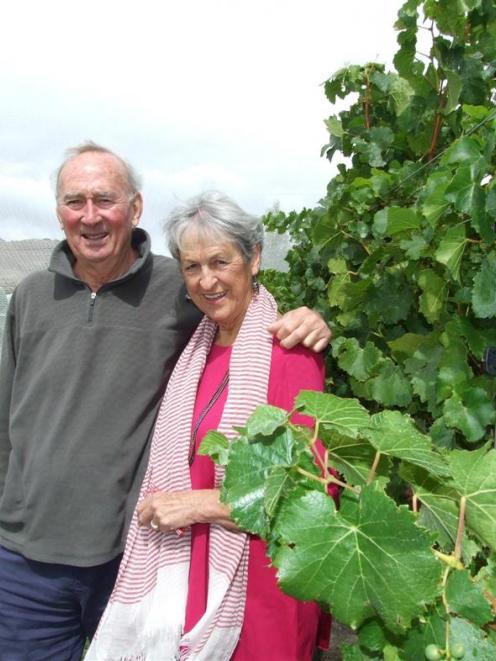 Blair and Estelle Hunt are leaving the Bannockburn vineyard they established 18 years ago. Photo by Lynda van Kempen.
Another Central Otago vineyard is changing hands to an overseas investor - the second this year.

The sale of Bald Hills, owned by Blair and Estelle Hunt, was approved by the Overseas Investment Office (OIO) this week.

The 11ha Bannockburn property has been bought by a Japanese investor, who has set up a company called Beecom (NZ) Ltd.

Grapes were first planted on the formerly ''rabbit-infested block of dirt'' in 1997, with the Hunts following the pioneers of the industry in that region, just ahead of the ''second wave'' of grape growers, Dr Hunt said yesterday.

They planted 70% of the 7ha vineyard in pinot noir and the rest in riesling and pinot gris vines.

The latter variety was seen as ''a bit faddish those days'', he said.

The couple had no experience in the industry aside from being ''I wouldn't say avid, but ... reasonable consumers of the product'', Dr Hunt said.

Eighteen years later, retirement is on the agenda for the couple, who are both in their 70s, when the new owner takes over the property in a fortnight.

They will shift to the Kapiti Coast to be closer to family, but admit it will be a wrench leaving Central Otago.

Although they were novices when they started in the wine industry, they had excellent advisers and winemakers, they said.

Dr Hunt's roles over the past two decades as Telford Rural Polytechnic chief executive, followed by a similar role at the Otago Polytechnic's Cromwell campus and a stint as manager of Dunstan Hospital, all added to the business and managerial skills he brought to the vineyard.

Their ''proudest moment'' as wine growers was winning two international wine awards within a week for their 2005 pinot noir.

The new owner planned to continue the operation. According to the New Zealand Companies Office website, Beecom (NZ) Ltd has one director, Isao Mita, of Japan.

The sale was the next phase in the evolution of the Central Otago wine industry and it was good news overseas investors were opting for properties in this district.

''The New Zealand industry is very small industry and it needs capital, so if an overseas investor picks up the baton, I see no problem with that. It's yet another endorsement of the work we've been doing to highlight this region,'' Mr Dicey said.

The OIO also granted consent recently for the sale of Northburn vineyard, near Cromwell, to Cloudy Bay Vineyards.