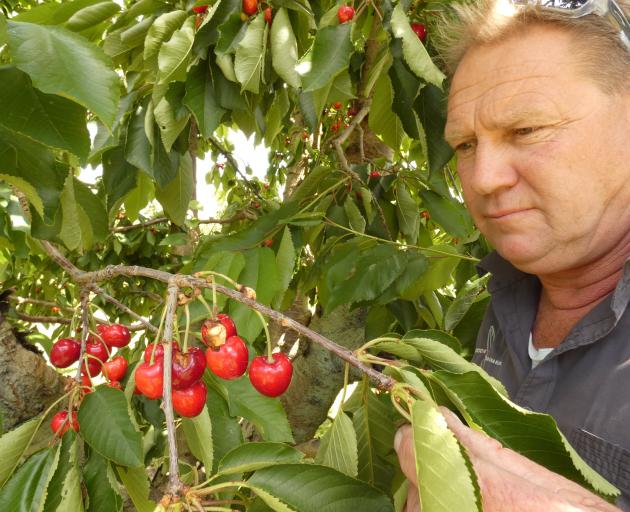 Police have confirmed a complaint was made earlier this month by a member of the public who believed they heard gun shots, and inquires were still being made.

‘‘No-one was injured, however, we are looking into this,’’ a spokeswoman said.

Mark Jackson, manager of both the Freeway and Jackson Orchards, said he was legally within his rights to protect his crop using licensed bird shooters.

As the cherry season was in full swing, shooting was being carried out on his orchards on a daily basis, he said.

‘‘That’s the only time we shoot is within the cherry season.’’

Freeway Orchard is situated along State Highway 8B on the west side of the bridge in the Central Otago town.

The 20 acre site has been in Mr Jackson’s family for 36 years.

Cromwell resident Michael Laws filed a complaint with police after he woke to the sound of gun shots, audible from his property in The Dunes subdivision on December 1.

Due to the police complaint, Mr Jackson delivered a letter the next day to neighbours of the Freeway orchard to inform them shooting would be in progress for the next six weeks and no access was permitted to the site.

‘‘When you start shooting at 7 o’clock on a Sunday morning without any warning directly adjacent to built up residential areas, then you pretty clearly have an issue ... it’s extraordinarily irresponsible.

‘‘They don’t employ netting which is the most common form of bird protection and the most effective.’’

He did not believe the situation was a case of ‘‘reverse sensitivity’’.

‘‘The district plan has rules about noise,’’ she said.

‘‘In the rural resource area this incudes noise from percussive devices for crop protection — I am aware that some fruit growers shoot birds or may use guns to scare birds.

‘‘We do not control the use of guns, that is a police matter.’’

A complaint by someone who does not understand rural living. There is no better way to control pests- be they rabbits, introduced birds (which kill native species), wallabies, wild pigs, goats etc. Suck it up! it is part of the rural scene. Always has and always will.