Blessings at Drybread Cemetery yesterday paved the way for a four-week archaeology project.

Researchers will today begin the excavation of parts of the historic cemetery in Central Otago, about 10km north of Omakau, in a bid to locate unmarked graves.

The project is run by the University of Otago and Southern Archaeology alongside the Drybread Cemetery Trust.

After similar projects were conducted at cemeteries in Milton, Lawrence and Cromwell, trust spokeswoman Karen Glassford approached the project team to help answer long-standing questions about the cemetery.

"With the university’s help, we can finally establish occupancy or vacancy over our unknown burial plots in a professional and sensitive manner," she said.

Southern Archaeology director Dr Peter Petchey said the first task would be to carefully remove about 15cm to 20cm of dirt, avoiding existing grave sites but working around other areas of the cemetery. 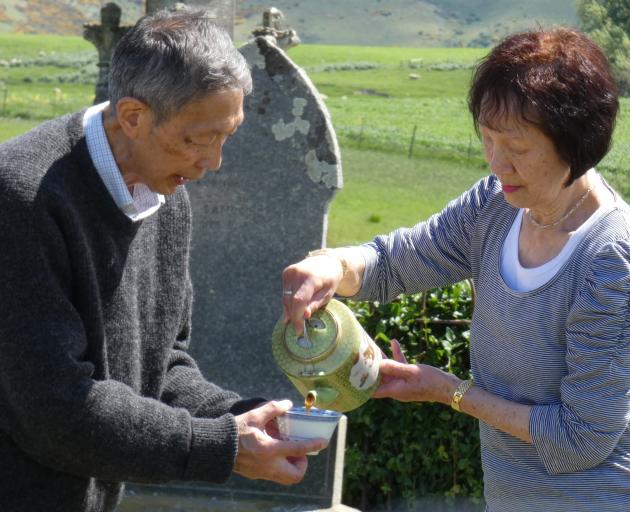 Leslie and Maisie Wong, of Dunedin, perform a Chinese spiritual blessing and prayer at Drybread Cemetery yesterday.PHOTO: SIMON HENDERSON
That could reveal markings in the ground that could suggest there was a grave, then the more laborious task of carefully sifting through areas could begin.

Department of Archaeology research fellow Dr Charlotte King said remains would be analysed in Dunedin to build a potential picture of who the person was, including ethnicity, age and gender.

Remains would then be reburied on site with markings explaining what they were able to find out, Dr King said.

Ahead of the first work beginning on the site, the Rev Penny Sinnamon, of Omakau, yesterday gave a blessing and prayer, acknowledging the life and death of the unknown people in the cemetery.

Leslie and Maisie Wong, of Dunedin, gave a prayer and a Chinese spiritual blessing of rice, tea and wine.

Mr Wong said if there were unknown Chinese burials at the cemetery that might mean they were excised and dumped as marginalised people, possibly outside the cemetery boundary.

"But they were the early settlers, they had the courage to come here, to break ground, to lay the foundations for us — the future generations."