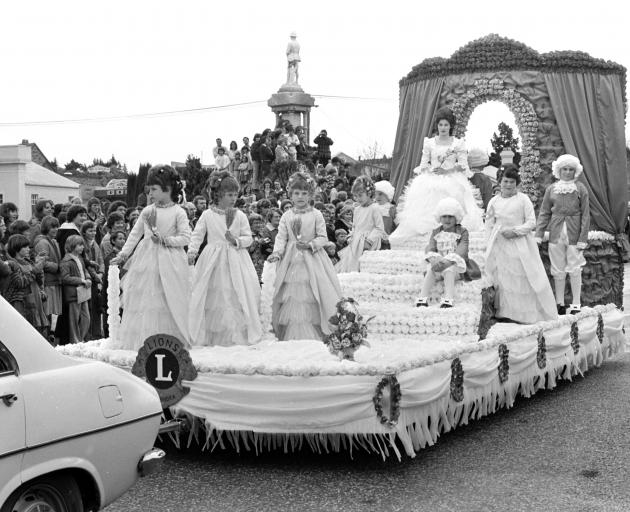 Is this you? Float princess Julie Taylor rides on the Alexandra Lions Club’s float ‘‘Dresden China’’, before being crowned Blossom Festival Queen for 1978. PHOTO: ODT FILES
A regal gathering of queens could soon grace Alexandra.

The Central Otago town, named after Princess  Alexandra of Denmark, wife of King Edward VII, will play host to several queens — of the  Alexandra Blossom Festival — to mark the festival’s 65th anniversary.

Festival event manager Martin McPherson explained they had a list of all former queens dating back to 1957, but were missing addresses for two — 1976 festival queen winner Liz Irvine and 1978 winner Julie Taylor, possibly known as Julie Philips.

The surnames were probably their maiden names, he said.

Although some festival queens had died, a previous invitation for former queens to attend the 60th anniversary in 2015 had been successful.

"We had about 30-plus former queens."

They attended the official mayoral welcome and took part in the Mardi Gras and festival procession, riding in vintage cars. He hoped to mail an invitation to former queens for this year’s 65th anniversary and was optimistic they could find the two elusive queens with the help of Otago Daily Times readers.

Last year, Mr Mcpherson took a gamble to ensure there was no break in the long-running festival, when it was threatened with cancellation due to Covid-19 pandemic restrictions.

The gamble paid off, as all regions, except Auckland, moved to Alert Level 1 at midnight on September 21, only days before the Blossom Festival began on September 25.