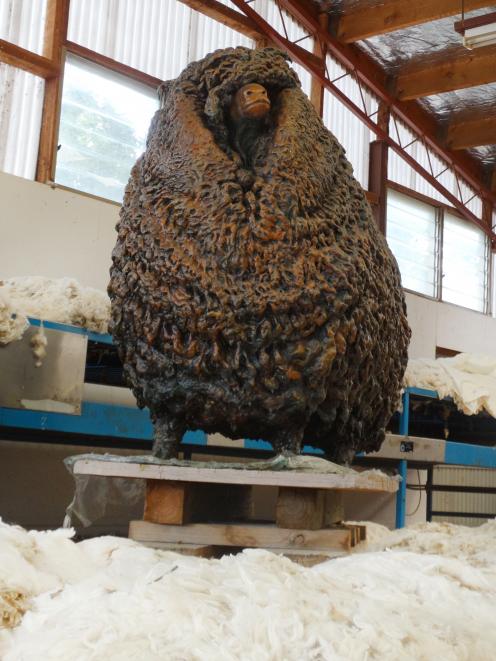 A new $50,000 bronze Shrek statue is set to be the main attraction of the ``Shrek Trek'', opening in the Tarras Village at the end of March. Photo: Sean Nugent
New Zealand's greatest sheep will be immortalised in his own Shrek-themed park in Tarras village set to open in March next year.

A new bronze Shrek statue will be the fore figure of the 1ha park, on land beside the Tarras Village car park.

A 50m to 60m path will wind its way up to the statue, lined with native plants from the Bendigo landscape the world famous sheep once called home, as well as storyboards detailing his story and others from the Tarras area.

Some of the plants will include silver and blue tussock, Spaniard, and manuka as well as rocks from the Bendigo area.

The idea of the park came from Bendigo Station's John Perriam, on whose land Shrek was found in 2004.

He recently bought the property where the park will be established.

He said the idea had been in the works for some time but moves were only able to be made once the public toilets were opened in October.

''It'll be a nice addition to the Tarras area,'' Mr Perriam said.

''Stories in the hills are very, very valuable to New Zealand tourism and Shrek is a good conduit for telling those stories.''

Construction of the park will begin in mid-January, and is likely to cost Mr Perriam around $50,000, on top of the $50,000 it cost him to commission the work of the new Shrek statue, created by Wanaka artist Minhal Al Halabi.

''The exposure Shrek gave to New Zealand was massive, so it's quite fitting this bronze statue goes up to Tarras, because the Tarras School was very instrumental in telling his story,'' Mr Perriam said.

''He proved it doesn't matter how small you are or how worthless you are, that is the power that he pulled.''

Despite owning the land and funding the project out of his own pocket, Mr Perriam said he would seek to vest the land with the council in the hope it would become a public place and a protected reserve in the future.

''I think it will give countless thousands and thousands more pleasure by being able to stop and take a photo,'' he added.