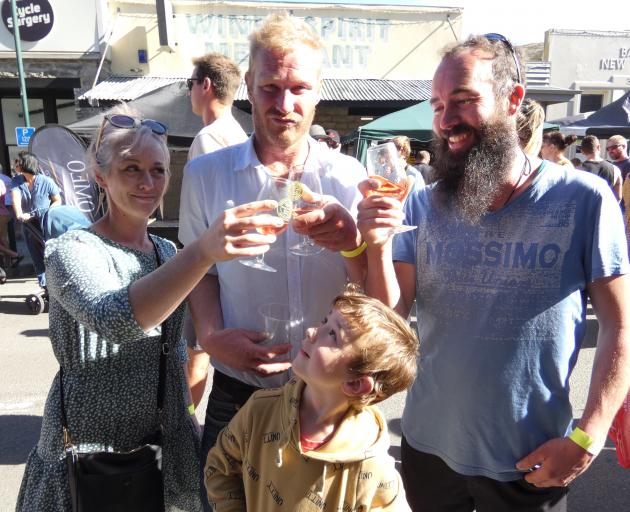 Gusty northwesterly winds did not seem to hamper the event for the bumper crowd, some saying the wind took the edge off the heat experienced in the past at the annual Easter Sunday fixture.

The Promote Dunstan event showcases the variety of local wines in the historic and picturesque setting of Clyde’s main drag, Sunderland St.

Event organiser Louise Joyce, who has led the event for the past 15 years, said yesterday brought a return to form for the festival, which ran every year from 2000 until last year, when it was cancelled due to Covid.

"It’s amazing, it’s just staggering with Covid alert levels down. People just want to get out."

While the punters were unfazed, for those vendors operating food and beverage stalls and trucks, as well as market stall-holders it was a different story.

Ms Joyce said the strong winds had made it the "most challenging" festival yet. In previous years, organisers had had a "dream run" with the weather.

"The stall-holders have been clutching their tents and bottles because of the strong wind gusts."

Some market stall-holders were forced to leave early because of it.

Yet, the people still came and while final numbers were yet to be tallied last night, she said the crowd was the "biggest in years".

Testament to that was the fact the 3000 glasses issued to some ticket holders as part of the event’s licence ran out at 2pm — two hours before it was scheduled to close.

Perseverance Estate Vineyard owner Murray Hewes said he and wife Jennie had showcased the wine they produced from their vineyard on Airport Rd near Alexandra since the event began, and the crowd was the biggest he had seen for a long time.

"People are making the most of it, there’s lots of people and they’re all drinking."

Mrs Hewes said in some ways, the wind was a good thing.

"In the past we have boiled in the heat."

Final numbers of attendees and money raised by Promote Dunstan was still to be tallied last night.