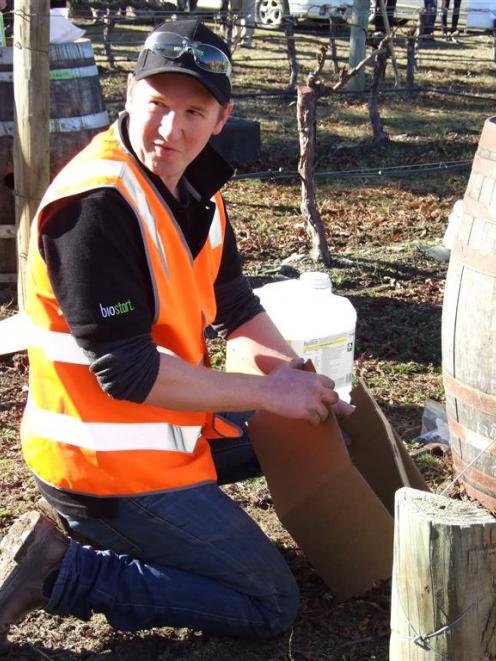 Eventual winner Mike Winter (29), of Amisfield Winery gets to grips with winebox construction during the competition. Photo by Lynda van Kempen.
A cardboard winebox proved to be the achilles heel of many of Central Otago's top young viticulturists yesterday.

The eight people vying for top honours in the Central Young Viticulturist of the Year contest, held at Bannockburn, had to complete a whole raft of activities, from calibrating sprayers and blind wine-tasting through to pruning and trellising.

The "Hortsports'' section was where it all briefly came unstuck for some.

Competitors had to dig in a post, set secateurs, mix a spray and use a cardboard template to make up a winebox.

Frowns could be seen on every competitor's face as they pondered over how to fold the template, origami-like, into a robust wine box.

The overall winner of the contest was Mike Winter (29), of Amisfield Wine, who has now won the competition three times.

He will represent the region at the national final in Blenheim at the end of next month.

Simon Gourley (25), of the Central Otago Wine Company, was second and Annabel Bulk (27), of Felton Road, was third.

The national co-ordinator for the contest, Nicky Grandorge, said one of the main benefits of the competition was the camaraderie built up between competitors and also with sponsors, key suppliers of the industry.

"It also helps build competitors' confidence and highlights their strengths and weaknesses,'' he said.

The executive officer of the Central Otago Winegrowers' Association, Natalie Wilson, said it also "gets their name out in the industry''.

Repeat competitors could use it to show their tenacity, she said.

The networking was valuable and a young growers' support group had started in the district.

As well as demonstrating practical and theory skills, the competitors had to answer general knowledge questions and deliver a speech at the awards function last night.