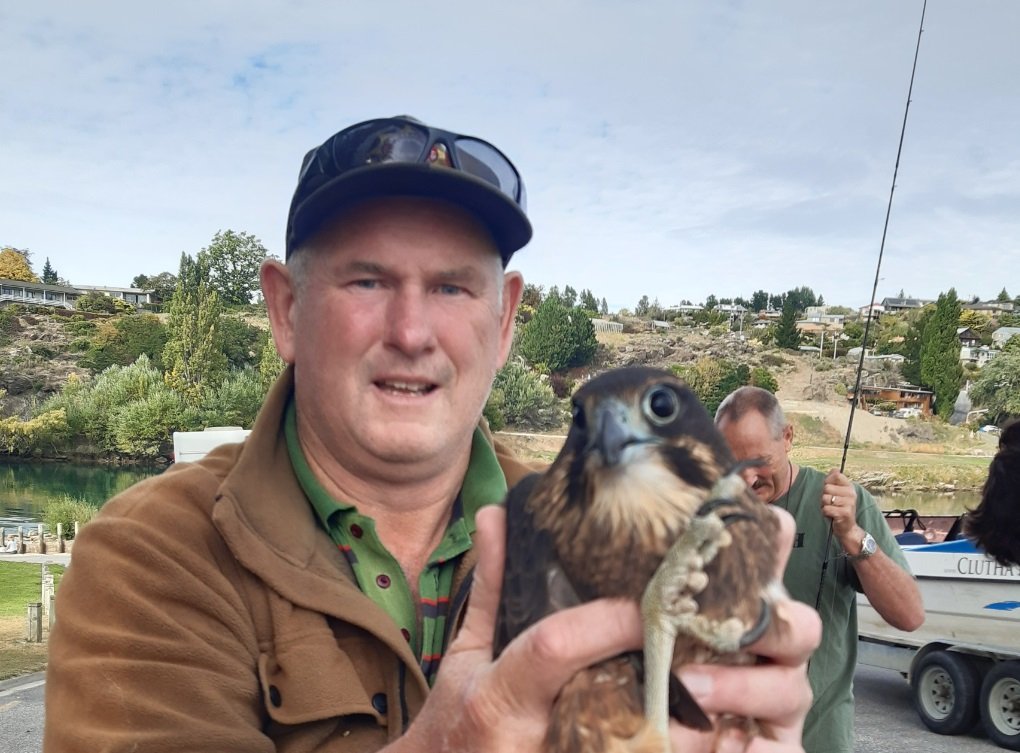 Derek Shaw with a native New Zealand falcon/karearea after it was was inadvertently added to the day’s catch while fishing in Alexandra. PHOTO: JUDITH HERKESS
In fishing, tales of the one that got away are often exaggerated - in the case of a karearea hooked in Alexandra on Sunday there is a photo to prove it.

The catch was unintentional, and off-duty police officer Detective Sergeant Derek Shaw was on hand to help save the the bird shortly after it was "hooked".

Mr Shaw said several boaties and fishermen were waiting to launch at the Alexandra boat ramp in Dunorling St about 10.15am when a karearea swooped in from willow trees behind the Central Otago District Council offices and took a soft bait lure on the end of a protruding fishing rod.

"The falcon impaled itself through the foot on the lure and crashed to the ground, unable to free itself."

The bird was immediately and carefully held while the barb was removed from the foot.

"The bird was released straight away and appeared to be none the worse for the misidentification of the prey.

"It was a stunning encounter for all involved, man and bird."

The Department of Conservation (Doc) was advised of the incident, he said.

The New Zealand falcon/karearea is endemic to this country and comes in three forms.

The "eastern" form, an example of which was caught on Sunday, typically lives in open drier habitats east of the Southern Alps but its habitat extends from coast to coast in the central South Island. It is listed as "at risk-in decline", by Doc.

The "bush" form, as the name suggests, live in forests.

They are found in the North Island, mainly south of Hamilton; and in the northwest South Island as far south as Greymouth.

Doc lists both the southern and bush forms as threatened species due to population decline.