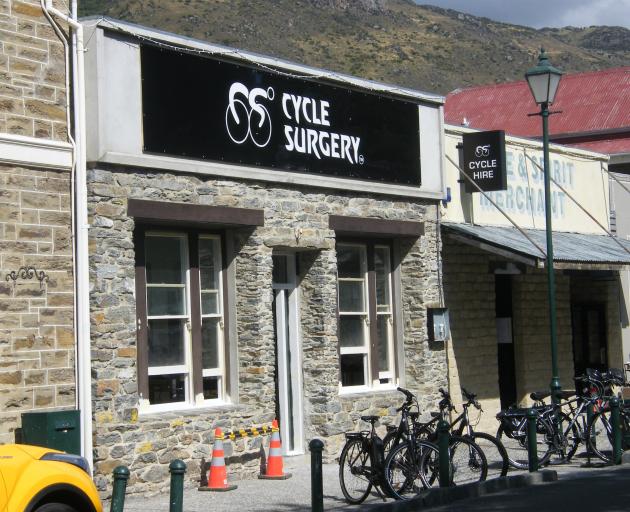 Branding at the Cycle Surgery building in Clyde has gone up. PHOTO: ADAM BURNS
Objections to a shop sign in Clyde’s main street have not been upheld by the Central Otago District Council and regional heritage agency representatives.

Clyde’s Ross Cowie says the modern sleek black sign on the Cycle Surgery building in Sunderland St does not reflect the historic values of the building or the streetscape.

However, Heritage New Zealand believes the historic fabric of the building has not been affected.

Mr Cowie said it would be sad if the appearance of the street became diluted.

"I think everyone has tried hard to meet heritage requirements for the area.

"We were quite surprised by how big and shiny the sign was."

He expressed his concerns in an email to Heritage New Zealand and the council last week.

Heritage New Zealand Otago and Southland area manager Denise Anderson said the acceptability of a sign could be "quite subjective".

"From Heritage New Zealand’s perspective, there is no significant impact on the heritage fabric of the building."

The council grants resource applications under the district plan, and Heritage New Zealand provided written approval to the application as an affected party.

Council planning manager David Campbell said a handful of queries had been received regarding the sign.

Some asked if it had consent and some were not happy with its look.

Mr Campbell said council was standing by its decision to grant resource consent.

" ... we cannot control the details of design and wording, other than minimum lettering size for signs on roads with different speed limits."

The historic building was previously occupied by the Dunstan Hotel.