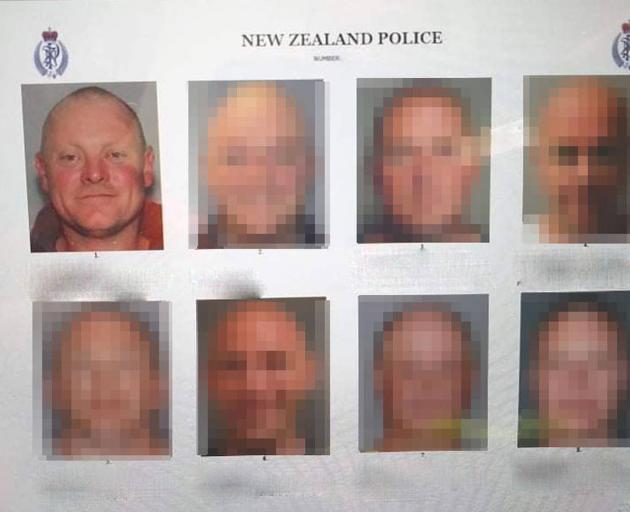 The lineup featuring Kurt Wyber. Photo: Supplied via NZ Herald
A man never involved with assault or robbery is seeking answers from police after discovering his face was used in a lineup for an aggravated robbery police training course in Cromwell.

Kurt Wyber says a mugshot from a drink-driving incident about six years ago had been used on the course in the South Island town at least three times.

And he only learned about it after he went to his local BP for a coffee one morning where all the staff who were laughing at him revealed what had happened.

They had been at one of the training courses which was being run by police and they spotted his face among a lineup of seven other men.

"I thought they were taking the piss. I said 'you're joking?' and they were like, 'nah, your photo was on the lineup part of the course'," Wyber said.

Police are being tight-lipped about the discovery, saying it was still under investigation. However, police have apologised in a letter to Wyber.

Meanwhile, a privacy lawyer says the use of Wyber's mugshot for the course is "a significant interference of his privacy".

When he arrived at work after visiting the BP, Wyber called the Cromwell police station seeking answers and later met with the senior sergeant who ran the course.

The pair looked through the slides of the course together and Wyber was dumbfounded to discover his photo was being used.

"I was blown away," Wyber told the Herald. "I'm angry about it more than anything."

Underneath his photo featured personal information such as Wyber's full name and date of birth. Seven similar-looking men around the same age also had their picture used.

The senior sergeant apologised profusely, saying the course had been put together by someone "up north", Wyber says.

Wyber took a photo of the lineup on his mobile phone, sending it away to his partner before police officers asked him to delete the evidence.

He complained about the incident and a Southern District Police inspector wrote to him saying it had created learning opportunities for the senior sergeant.

The inspector mentioned how the senior sergeant had already apologised about the situation and they wrote to Wyber to "underscore this sentiment".

"Your complaint has raised learning opportunities for the officer involved, and this has been reinforced to my satisfaction."

Wyber has a history of suffering from anxiety and the discovery of his photo being used in a lineup about aggravated robbery set it off again.

"I had to go to my doctor and get back on medication," he said.

"Driving around my wee town each night, I was sitting there thinking, 'are people looking at me sideways?' It did affect me quite badly.

"I'm not looking over my shoulder now but I've moved on to a different town ... It's settled down a wee bit."

Wyber says police officers at the station were horrified it could happen but he questioned why they didn't use cartoon characters or people from overseas.

He hoped to get an explanation from police about how his photo ended up on the course.

"It was an aggravated armed robbery course. You look through my record and it's only driving charges. I gave up drinking two years ago," he said.

"I've been done for DIC [drunk in charge of a vehicle] a few times, all low level, but I've never been done for drugs, assault … I'm not that [kind of] person."

Southern District Commander Superintendent Paul Basham says police are making inquiries about how the photo was used in an external training session.

"As inquiries are ongoing, police are not in a position to provide further detail at this time," Basham said.

Privacy lawyer Kathryn Dalziel says she couldn't think why police would use Wyber's photo and not someone made up.

"Either check [with the person] or do a made-up photo if you're only training people what to do with aggravated robbers," she told the Herald.

"What it's meant is that people in his community have come up and said we've seen you in a police line up as part of our training with aggravated robbery.

"It is actually slightly outrageous that they're using his photo, particularly someone from the community."

Wyber has thought about taking legal action about the use of his photo, but he says he doesn't have the funds to pay a lawyer.