Curlers answer the call to ice 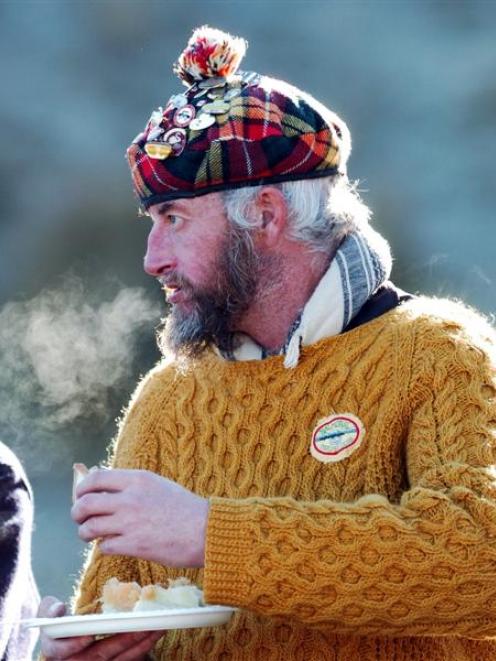 Wilson Wahrlich, of Ranfurly, enjoys lunch during the Naseby Curling Centre's competition in the Styx Valley yesterday.
Almost - but not quite.

It may not have been a bonspiel but the Styx Valley yesterday hosted the first significant outdoor ice-based event of this year's Central Otago winter sporting calendar.

Eighty curlers competed for the Naseby Curling Centre's President's Crampit trophy on a pond at a Greenfield-owned property on Linnburn Runs Rd.

Naseby Curling Centre president Gavan Herlihy said it was the first time the trophy, which is held on the first available outdoor ice in the centre's catchment, had been staged since 2007.

Ice needs to be about 5cm thick for curling.

Ten clubs from the Maniototo, Styx and Dunedin took part in the event held in fine, clear weather.
Curlers were on the ice by 8.30am and the competition did not finish until about 5pm.

"The great thing about curling is everyone is equal on the ice. There are no names or titles. Outside curling has a distinct protocol with respect and sportsmanship shown to everyone on the ice.

"If God has invented a better sport than outdoor curling it must only be played in heaven."

The event was won by Naseby club Otago Central, the only team to win all its games. A team from the Serpentine club was awarded the leather medal as the worst performing team.

For the first time in about 30 years Kyeburn Curling Club member David Greer did not compete, although he did attend part of the day.

Greer, whose father Alan in 1967 organised the trophy the curlers compete for, was taking part in the 2010 New Zealand National Curling Championships at the Maniototo Curling International complex in Naseby.

Both father and son had played on President's Crampit winning teams.

Yesterday's competition at Styx was open only to clubs from the Naseby Curling Centre. A bonspiel is open to every club in New Zealand and the Idaburn dam is the only area of outdoor ice in the country large enough to stage it.

Idaburn farmer Ken Gillespie said last night the dam had 9mm of ice, although the surface itself was looking very good.