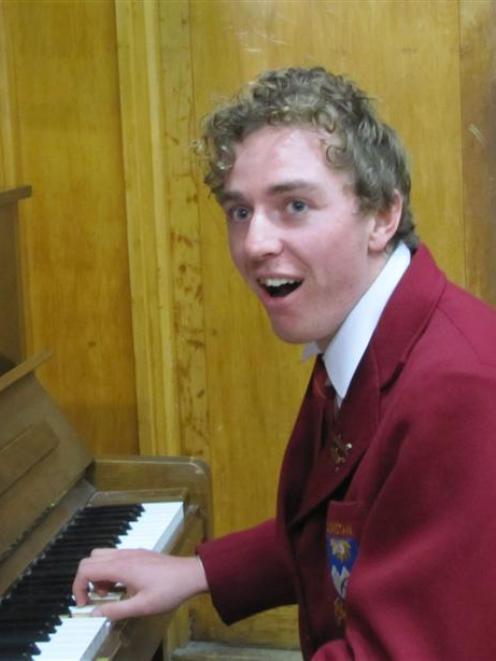 The Dunstan High School pupil, who sings bass and plays piano and guitar, is modest about his achievements but admits his family is "stoked".

Nicholas says he wanted to start singing as soon as he could talk but his music teacher would not let him.

"I was made to wait 'till I could at least read," he said.

He started singing lessons with Ruth Reid when he was 6.

"He enters competitions every year to great success."

Mrs Reid, a music teacher since 1973, has had nine pupils who have made it into this choir, including Nicholas' older brother, Simon.

"My brother had fun in the choir and I have been singing forever so this [choir] was something to aim towards," Nicholas said.

Nicholas said he used to get nervous before auditions or performances. "I used to, but not any more.

"I had to do two auditions for this choir though. The first was in Dunedin but I had laryngitis.

"I got three notes into my song and they were like 'That's enough Nicholas'."

Because he could not sing for that audition Nicholas had to wait for the Christchurch auditions which were delayed due to the earthquake.

He says he prefers rock and dance music but does not have the right voice for those styles, so when it comes to singing, he prefers "the more contemporary kind of stuff".

He also enjoys musicals, performing as "just one of the background guys" in Grease last term.

Tertiary-level contemporary music study is an option but he still has not made up his mind. He is also passionate about drama and is considering becoming a drama teacher.

The choir, which has been in existence since 1986, holds nationwide auditions every two years and selects about 54 promising young singers.

The pupils gather during the school holidays for rehearsals and public performances.

"We went to Wellington last year for workshops ... and are off to Greece in June next year."

The students have to cover their own travel costs so Mrs Reid is organising a fundraising variety concert to help Nicholas.

"A substantial sum will go to Nicholas and, depending on how much we raise, some will go to the [Dunstan] high school and maybe some to the Christchurch quake relief.

"The good thing is, all the students have to pay the same cost no matter where they are from, which means students from small towns like this aren't disadvantaged." Mrs Reid said.

The variety concert will take place at 2pm on July 9 at the Alexandra Theatre.