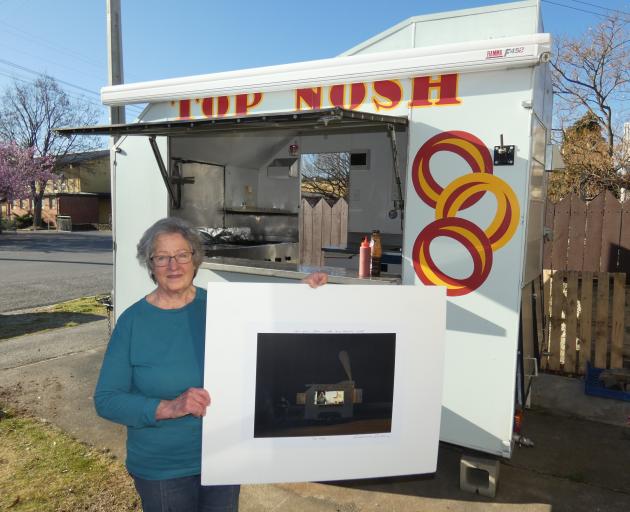 Jean Bonsor in her Top Nosh food trailer holds a signed copy of Grahame Sydney’s eponymous work. PHOTO: JARED MORGAN
Immortalised on canvas in Grahame Sydney’s work Top Nosh, the food caravan of the same name is up for sale.

The story behind the work is as compelling as the work itself.

For Alexandra woman Jean Bonsor and her late husband Garnet, the food trailer represented a way to make a living in New Zealand after they fled Harare, Zimbabwe in 2003 when their farm was seized under President Robert Mugabe’s regime.

"We had this mob of about 300 to 400 people descend on the farm and we had to barricade ourselves in. Then it went quiet for about 10 months and we thought maybe things will be fine ... Then we got a notice saying we had 10 days to get out."

The couple fared better than many white farmers forced off their land.

Because their son Neville was in New Zealand they were allowed to move their furniture, but their farm and all stock and plant had to be abandoned.

Most farmers forced from their land left with only suitcases and those that resisted risked, or paid with, their lives, she said.

In 2006 they started selling sausages from a small barbecue at the Alexandra markets.

Mr Bonsor saw an opportunity and set about designing and building a food trailer from the chassis up in the couple’s front yard, Mrs Bonsor said.

What followed was a "learning curve", first as test runs at the Alexandra markets. The real test came at the Royal Show in Christchurch in 2008.

"We were totally overwhelmed by the volume of customers wanting our Kiwiana style of food.

"But we were more experienced and ready for the rush in subsequent years."

That included a circuit of all major events in Central Otago and beyond, she said.

Sydney was spotted taking photos of the trailer not long before Mr Bonsor died in 2015.

Mrs Bonsor said she kept the trailer on the summer circuit to honour his memory and it was in St Bathans the following year that the artist approached her at a market to inform her he had completed the work, which, like the trailer, he called Top Nosh, she said.

He later gave her and her son signed prints of the work.

Soldiering on with the business for the past five years with help from others had not been easy and included her learning to back the trailer.

"There were plenty of tears."

Now she has decided to hang up her apron for good.