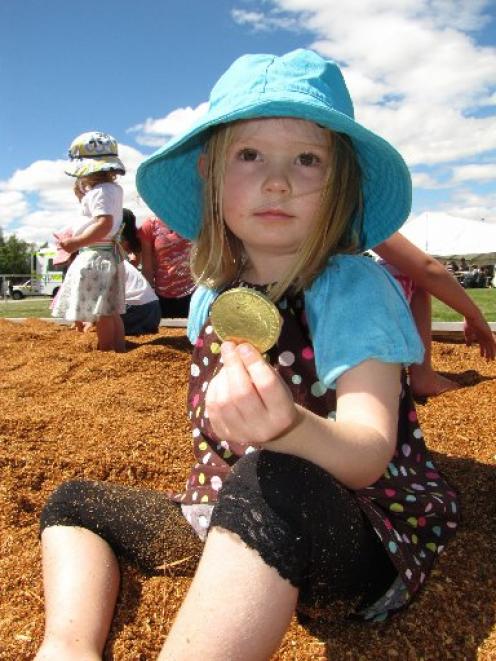 Phoebe Harrex (3), of St Bathans, shows off her prize during the Sawdust Dig for the Kids at the Central Otago A&P show on Saturday. Photo by Sarah Marquet.
More entertainment and "great weather" may have been responsible for the "above average" turnout at the 115th Central Otago A&P Show in Omakau on Saturday, according to show committee president Geoff Clouston.

He thought it was a "very successful day" with horse and sheep entries "well up" on previous years and two new competitions which proved popular.

Those were the Kick for Cash, in which local rugby players displayed their kicking prowess in return for cash prizes, and the Lawn Mower race.

In addition, there was the popular Jack Russell race, a fashion parade, shearing competitions, horse and sheep judging, horse-jumping competitions and the Home Industries competitions for best flowers, best baking and preserves and the Show Bay competition, which saw various groups create a scene on the theme of Christmas Eve.

There was also free entertainment for children including a magic show, face painting, a mud slide, lolly scramble and sawdust dig for buried treasure.

The finale of the show was The Cut Out - a concert featuring Jimmy Dundass and local artists.

The Maniototo show is tomorrow and the Mt Benger show in Roxburgh is on Saturday.