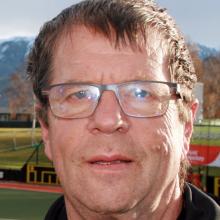 Mike Paardekooper
Cromwell's Michael Paardekooper has been remembered for his "colossal" contribution to Central Otago and the example he has set for service to community.

Mr Paardekooper, who had battled Parkinson’s disease and cancer, died on Thursday, aged 61.

His contributions to Cromwell and the broader Central Otago and sporting community were "colossal and possibly unequalled", Central Otago Mayor Tim Cadogan said.

Mr Paardekooper, along with Terry Emmitt, of Bannockburn, had led the construction of first Cromwell’s sand hockey turf, and then its subsequent redevelopment into a water turf.

The water turf hosted the Black Sticks at a Tri-Nations tournament last year and Mr Paardekooper said at the time the significant sporting, community and economic benefits the tournament brought justified "the effort we put into upgrading the turf and the decision to make it as good as possible".

Mr Paardekooper also gave lengthy service in local government, serving as a Central Otago District Council Cromwell ward councillor from 1992 to 1998 and on the Cromwell Community Board from 1989 to 1998. He was the board’s chairman for his last two terms.

"When you look at what the board did in that time and under his leadership, that’s what put the Cromwell Community Board in the good position that it’s in now, in terms of assets and infrastructure. It would be the envy of many boards."

Mr Paardekooper’s real legacy was how hard he worked for Cromwell.

"He left us with an example of community spirit and community engagement that we can all look to and learn from."