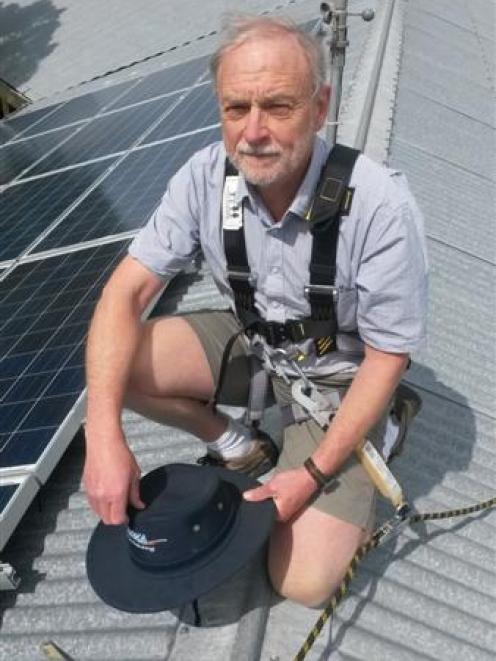 Atmospheric scientist Ben Liley thinks solar panels should power everything from research stations to family homes. Photo by Jono Edwards
When solar panels were being installed to power their multimillion dollar scientific equipment, the scientists at Lauder saw the opportunity to do what they do best: research.

Last week, 72 solar panels were installed on the roof of the National Institute of Water and Atmospheric Research's (Niwa) Lauder station, 35km northeast of Alexandra.

On a clear, sunny day the panels could collect 18kW of energy.

This would be almost enough to power the multimillion dollar equipment at the site.

The use of solar panels would double as an experiment to assess how cloud cover and panel tilting affected energy collection.

The station did a range of atmospheric work including measuring greenhouse gases in the atmosphere and other studies about climate change more generally.

It was built in 1960 to study the aurora as the location had the clearest night skies in the country due to low levels of cloud and dust.

In the 1990s the station was an important centre for measuring ozone levels.

Atmospheric scientist Ben Liley said the tests would help households determine the potential energy that could be gathered from solar panels, depending on location.

''Research like this will be very helpful for households thinking of setting up their own solar panels.''

The information gathered would also be used to update Niwa's online solarview tool which estimates solar energy captured at any given address in the country.

There was no reason New Zealand could not hugely expand its use of solar panels as the country's climate was more suited to solar energy collection than the world's solar energy leader Germany, Mr Liley said.

Solar power is a very democratic source of energy, he says.

''No one can install their own hydro electric dam, but the drop in prices of solar panels means that most New Zealand households can afford to install them,'' he said.

Infinite Energy general manager Regan Heal said the way solar panels were strung together meant if one panel was blocked from the sun, the others would collect less energy.

''There is a nice feature tree here which blocks the sun from some of the panels so we had to recalibrate the whole thing.''

The panels now needed independent inspection and should be operational within a fortnight, Mr Heal said.

In the future the centre might install more panels on its site to do a range of tests, Mr Liley said.

The Lauder station also calibrates all of Niwa's radiation sensors from all its monitoring stations across the country.