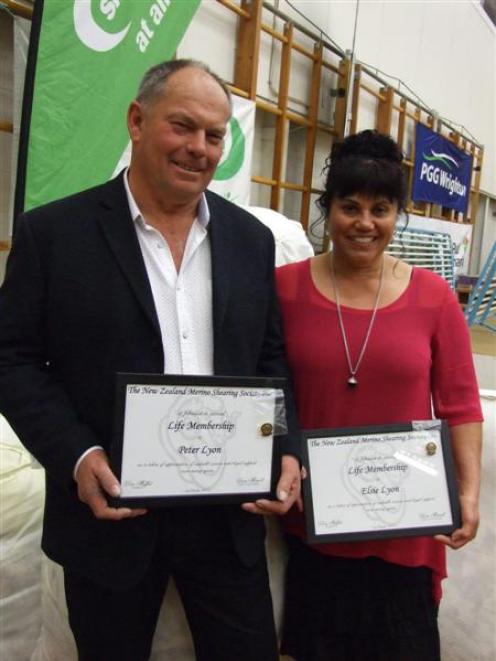 Peter and Elsie Lyon were honoured with life membership to the New Zealand Merino Shearing Society. Photo by Lynda Van Kempen.
A couple described as vital cogs in the fine wool industry had their efforts recognised at the weekend.

Peter and Elsie Lyon, of Alexandra, received life membership to the New Zealand Merino Shearing Society. The award - a surprise to the couple - was made during the national merino shearing championships in Alexandra on Saturday night.

The couple run Peter Lyon Shearing, which had a turnover of more than $10 million last year.

The Lyons and their workers also feature on television programme Shearing Gang, which screens on Prime. Filming is under way on the show's fourth series.

Society president Don Moffat said the business sheared about two million sheep each year and the Lyons were the ''no-nonsense supremoes of New Zealand merino shearing''.

They were the perfect example of business people who ''got the teamwork right'' and their passion and dedication for the industry and shearing and woolhandling competitions was obvious.

Mrs Lyon had numerous accolades as woolhandler and mentored others and Mr Lyon had ''an illustrious'' career as a shearer and also mentored shearers, Mr Moffat said.

The couple had spent 25 years as members of the merino shearing society and continued to take active roles within the society and in sponsoring the event.

''It's not an overstatement to claim that this competition would not survive without both of you,'' he told them.

Mr Lyon said he was unsure whether the couple deserved the honour. He paid tribute to society patron Bruce Paterson, of Gimmerburn, who died in April.

''He was one of our best mentors and I feel it's our duty to do this and enjoy our association ... We're not involved because we want to get any rewards back for it.''