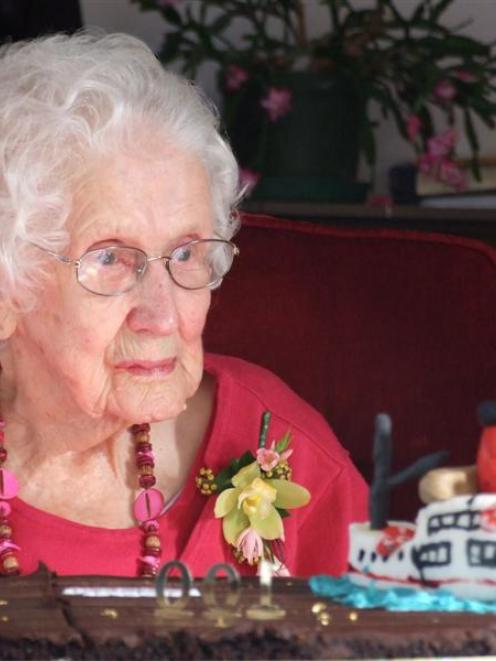 Mrs Lewis celebrated her milestone birthday yesterday at Ripponburn Hospital and Home, Cromwell, where she has lived for the past five months.

Five generations of her family were present, with the youngest descendant, great-great-granddaughter Cypress Lewis-Neho, of Invercargill, about to celebrate her first birthday next week.

Mrs Lewis lost her voice about two years ago, her son Eon Lewis, of Queenstown, said.

She had a very active life and was never idle, even in retirement.

"She's been a hard worker all her life, and one of the secrets of her long life is that she probably never ate much refined food - no pre-packaged stuff like what's around today," Mr Lewis said.

His mother, a member of the Dagg family, was a fourth-generation Queenstown resident and was brought up on the family farm on Malaghans Rd.

There was no secondary school, so, after attending Arthurs Point School and Queenstown Primary, she continued her schooling by learning accounting and typing from nuns at the catholic school.

She worked on the Kawarau Falls dam scheme and was later assistant to the Queenstown Borough Council's town clerk.

Mrs Lewis met her husband-to-be, Les, at a rowing regatta, and they were married in 1931.

As well as raising a family of two sons, Mrs Lewis worked in the ticket office at the theatre, and later ran the tearooms on the Earnslaw, while her husband was the ship's carpenter.

Mrs Lewis and her late son, Roy, also ran a grocery shop at the end of the mall.

The couple took in boarders for many years and considered them a second family, Mr Lewis said.

Mrs Lewis had a great sense of humour and enjoyed embroidery and knitting, Mr Lewis said.

She was a member of several clubs, including the Scottish Society and Country Women's Institute. Cromwell piper Roddy Maxwell performed at Mrs Lewis's birthday party, and she enjoyed the bracket of songs he played.