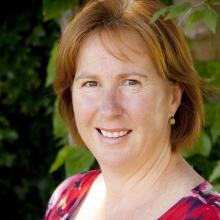 Julie Muir.
Motorists have ignored parking restrictions in Cromwell and Alexandra for nine years but now the honeymoon is over.

Restricted parking zones and signs were introduced in 2007 and a roading bylaw, which introduced parking fines, took effect last year. The Central Otago District Council has just started enforcing the bylaw and warns motorists there will  be only a short ''grace'' period before errant parkers get hit with fines.

''Probably the first time the parking warden goes around, they'll just give people warnings but the next time around, they'll get fined,'' council infrastructure manager Julie Muir said yesterday.

Breaching the term of a restricted parking area will cost motorists $40. Most restrictions are in the business centres of the two towns and range from 10-minute to two-hour time limits, depending on the location.

She did not expect it to be a ''big revenue-generating exercise''.

''In fact, we're hoping we won't get much money in fines, because that'll mean people are abiding by the restrictions.

''We tried the voluntary compliance route, but as soon as people realise enforcement doesn't take place, they just ignore the restrictions. Now we're employing a parking warden, who will patrol areas randomly. It's not really about issuing fines, it's about educating motorists to ease the pressure on parks at busy times,'' Ms Muir said.

The council had employed Cougar Security to carry out the task. The firm also enforced the Queenstown Lakes District Council's parking bylaws, Ms Muir said. Peak holiday time when the towns' populations increased placed the most pressure on town centre parks, so it was the best time to enforce the bylaws, she said. Businesses in the towns had asked for the restrictions to be enforced.

The information about the bylaw being policed was revealed on the council's Facebook page.