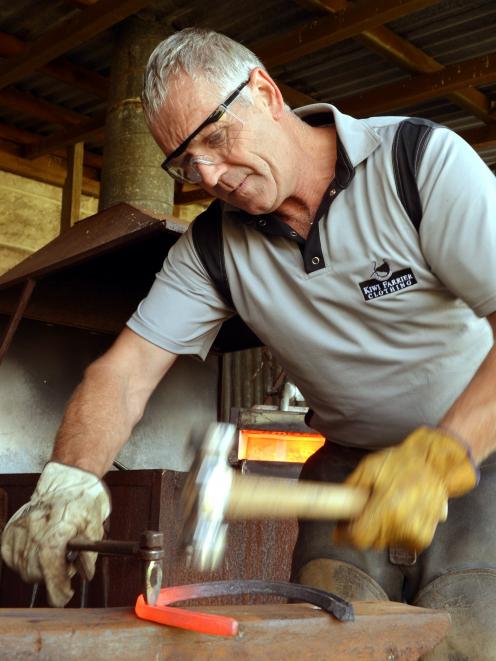 That's why North Otago farrier Malcolm Oakes puts in so much time before the annual trek across Central Otago's back country.

The Goldfields Cavalcade's 25th birthday is being celebrated this year. Nine trails - three of walkers, four of riders, one of light wagons and one of heavy wagons - are wending their way towards Omakau, arriving for festivities on Saturday.

Mr Oakes said many farmers made their land available to the Cavalcade. Such support, and that from various communities, was invaluable to the cavalcade's ongoing success.

With permission secured, his trail of 75 to 80 riders and 55 horses met at Mt Dasher Station on Sunday afternoon. On Monday they rode across the head of the Duntroon gold-mining water races towards Ben Ledi Station. Yesterday's ride took them through tussock terrain to Glenshee Station in Danseys Pass.

Wedderburn is today's destination, then they follow the water race to Falls Dam and Hawkdun Station tomorrow. Friday's ride to St Bathans passes the old town of Tinkers and the Drybread cemetery, leaving just two hours in the saddle to reach Omakau on Saturday.

This is Mr Oakes' 12th Cavalcade. He was a wrangler many times before becoming a trail boss for the last four years.

As well as riding ability, a trail boss needed ''good people skills, stockmanship, and a sense of direction''.

The weather could force last-minute changes so the boss must guide participants safely to their stop-over, where a team of caterers would have meals ready.

The riders had varying experience and came from all sorts of professions, Mr Oakes said. His posse includes two groups of North Islanders and people who had been caught up in the Canterbury fires.

Cantabrians who went on the Cavalcade after the earthquakes found it therapeutic, he said.

He was chuffed that local people were also riding his trail, which he regarded as a vote of confidence.

He was full of praise for his ''great team'', comprising five wranglers and three gophers. And he said he ''couldn't do it'' without the support of his wife, Trish.