It is a race against and around time.

As Alexandra’s clock on the hill hit 5.45pm yesterday the stopwatch on the annual Round the Clock Race started ticking.

The race started near the Manuherikia River in the Linger and Die reserve.

It pittted teams and individuals against each other as they traversed the river and scrambled up to the hillside timepiece that has served the town since 1968 and back again.

Bent on turning in their best performances, the runners had little time to take in the panoramic view of Alexandra and nearby mountain ranges. 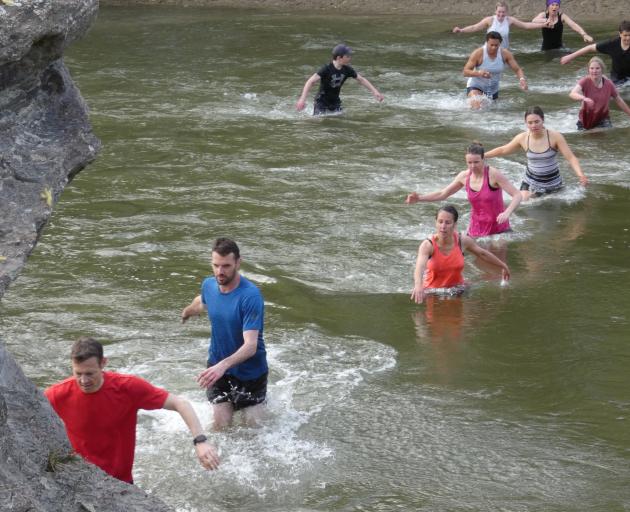 Round the Clock Race men’s individual winner Joost Breuk and runner-up James Brent (first and second from left), both of Alexandra, lead the pack across the Manuherikia River at the start of the race. PHOTO: JARED MORGAN

The first woman home was Anna Yeoman, of Alexandra, who crossed the finish line in 11min 25sec.

Vania Smith was second with a time of 12min 09sec.

The race attracted individual competitors and relay teams from schools and the adult mixed relay teams included one which completed the river leg by kayak and another which used a horse.

The runners barely had time to catch their breath before the Mardi Gras swung into action at nearby Rivers Park at 6pm.

Festival event manager Martin McPherson said the festival was off to a fine start with good crowd numbers.

"The weather gods have been kind and it augurs well for the rest of the weekend."

The festival had been in doubt right up until New Zealand’s move to Covid-19 Alert Level 1 on Monday, and it is potentially the largest festival to take place since the pandemic began.

Events are scheduled for tomorrow include a Lion, the Witch and the Wardrobe-themed country fair, the Linger and Die Mountain Bike Series and the Central Otago Whitewater Blossom Festival Kayak Slalom.

Smaller events run for the rest of the week.