Ranfurly’s main street was blocked for about an hour yesterday, as protesters gathered outside the bank. Photos: Peter McIntosh.
If the Westpac bank’s Ranfurly branch closed, as was being threatened, Maniototo customers could well retaliate by changing  banks, a protest rally in the town was told yesterday.

Ranfurly’s main street was blocked for about an hour  as about 300 people gathered outside the bank — the only one in the district — many waving placards objecting to the proposed closure.

Pauline Carson, of Naseby, said it was the first placard she had waved in any protest rally in her "60-odd" years.

"This is something that affects absolutely everyone, all of the Maniototo,  and issues like this bring a community closer together," she said. 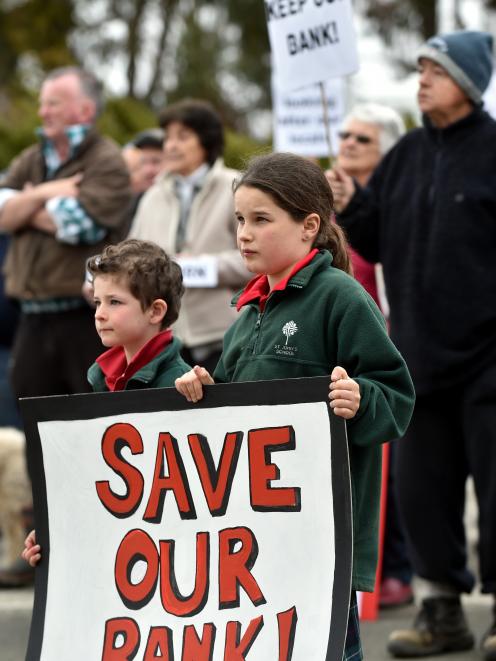 Ella Gibson (10) and her brother Ben (6) were among several school pupils protesting the proposed closure of the bank. Photo: Peter McIntosh.
Stuart Hore (77), of Naseby, told the crowd four generations of his family had banked in the district.

"I am loath to take my banking elsewhere but if they shift the bank from Ranfurly, I will surely think about it."

Ella Gibson (10) and her brother Ben (6), of St Johns School, holding a "Save Our Bank" sign, said they wanted the bank kept open.

"We need it so people don’t have to travel and so people can keep their job," Ben said, adding that his nana was one of the two bank workers who would lose their jobs.

Ranfurly is one of 19 Westpac branches around the country earmarked for closure. Like the Fairlie branch, the Ranfurly one is the only bank in its area.

Protest organiser, businesswoman and head of the Maniototo business group, Amie Pont, of Kyeburn, said the reaction when the bank announced the proposed closure a fortnight ago ranged from anger and shock to disbelief.

Maniototo was a vibrant, growing community, property values were increasing, the Maniototo Area School was planning a $8.5million to $10million upgrade,  the district’s hospital planned a redevelopment and visitor numbers were increasing, she said.

"I had other mayors ringing me on the way here to say ‘Can we help out?'"A request to meet the bank hierarchy had been turned down, he said.

"They seem to be scared of meeting with us."

If the Ranfurly branch closed, it would mean an 180km round trip for Maniototo residents to the nearest bank in Alexandra.

If he was a Westpac customer in the area and the bank was closed, he would change banks, he said.

Mrs Pont was happy with the support for the protest.

"You could see there was a lot of emotion today, which showed the passion people have about this. We’re not usually very vocal about things but people feel strongly about this."