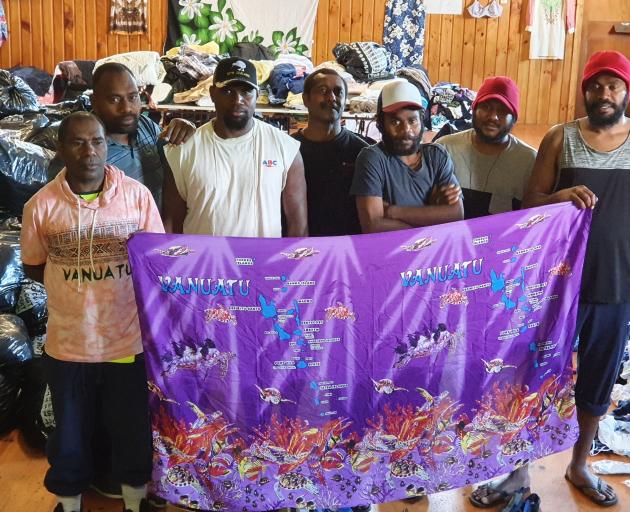 Vanuatuan seasonal workers stranded by Covid-19 (from left) Ritchie Ross, Tali Vaika, George Wola, Roger Kalman, Hango Hongo, Alfred Manuel and Harry Ayong, a picking crew for CAJ Orchards in Ettrick, will not have to brave the cold with no winter clothing after a group of women stepped in to help. PHOTO: ANNE-MARIE GARDINER
Teviot Valley residents have rallied around Vanuatuans stranded by the Covid-19 pandemic by providing clothes for a winter the visiting workers did not expect to experience.

A group of Teviot Valley women mobilised to help the men by collecting clothes from across Central Otago, Queenstown, and as far as Dunedin — finally filling a shipping container with 30 tonnes of second-hand clothing.

That clothing was yesterday being sorted in the Ettrick Hall to be distributed in the next week.

Spokeswoman for the group Anne-Marie Gardiner said the men, known locally as "the summer boys", were in the Ettrick area as part of the Recognised Seasonal Employer (RSE) scheme.

The scheme allows the horticulture and viticulture industries to recruit workers from Pacific countries for seasonal work.

"There are hundreds of RSE workers from the Pacific Islands, including Vanuatu, stuck in New Zealand due to borders [being] closed between their homeland and here."

The problem for the men was the rapid approach of winter.

"Some of these men arrived in spring to Central Otago and would normally be back home in Vanuatu by now.

"When they left home they didn’t pack winter clothes, as they are not normally here for winter."

Earlier this week, when temperatures dropped -4.7degC in Ettrick, the women sprang into action to source the men winter clothing and clothes for them to take home to their families, Miss Gardiner said.

The men normally went shopping for second-hand clothes for their families but the3 lockdown had put paid to any shopping expeditions, she said.

The clothing would be distributed to the men in such a way they did not break their living group "bubbles".