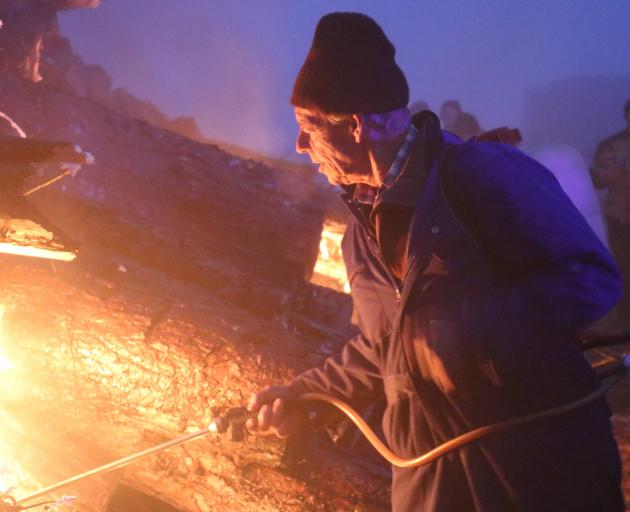 Ken Gillespie lights the bonfire at the Brass Monkey rally in 2018. Photo: Allied Press files
This year’s Brass Monkey Rally may be the last but an alternative event seems likely to replace it.

Oturehua man Ken Gillespie said it was a case of ‘‘watch this space’’.

Mr Gillespie should know — he has owned the rally site at the Idaburn Dam for ‘‘30-odd years’’.

‘‘I’m the patron of the Brass Monkey and I was at the meetings of the Otago Motorcycle Club. We said, ‘Look. If we’re not going to have any Brass Monkey, we should do something else. Ken Gillespie
‘‘We’ve got enough infrastructure on that site; we’ve got to do something.’’

When Mr Gillespie sold out of farming to retire, he retained the 6ha site out of nostalgia and to give the Brass Monkey a home.

With the event ending after this year’s 40th and final rally on May 30, the Otago Motorcycle Club and the Oturehua Winter Sports Club had to consider what to do with the infrastructure on the site, he said.

Whether any new event would be similar in format he could not say.

‘‘It could be trail bikes. We’ve got a fair few trail bike riders in the club. It could be mountain bikes,’’ he said.

The final rally will feature fireworks, a bonfire and three bands including The Jordan Luck Band which would would headline the event on Saturday.

About 300 people attended the first rally in 1981. The event captured the imagination of the motorcyling community and year-on-year attendance grew, reaching up to 5000 people at the peak of its popularity.

Age has been cited as a key reason why the numbers attending had fallen.

‘‘After 40 years, a lot of the people who were there at the beginning are still there now, so age has a bit to do with it.’’

Mr Willems said when the rally began, there was a dearth of motorcycle rallies, but now there were a ‘‘quite a few’’ and the club felt the rally had ‘‘run its course’’.

‘‘Who knows what the future will bring.’’

About 1000 patrons attended the rally last year and it is expected numbers will be up for its swansong. Whatever format a replacement event takes, Mr Gillespie said it was unlikely to take place at Queen’s Birthday Weekend.

He blames the MetService.

‘‘The past couple of years I called the MetService for scaremongering forecasts. I said, ‘Look. This a charitable event for the Otago Motorcycle Club and you are scaring people with forecasts that never eventuate’.’’