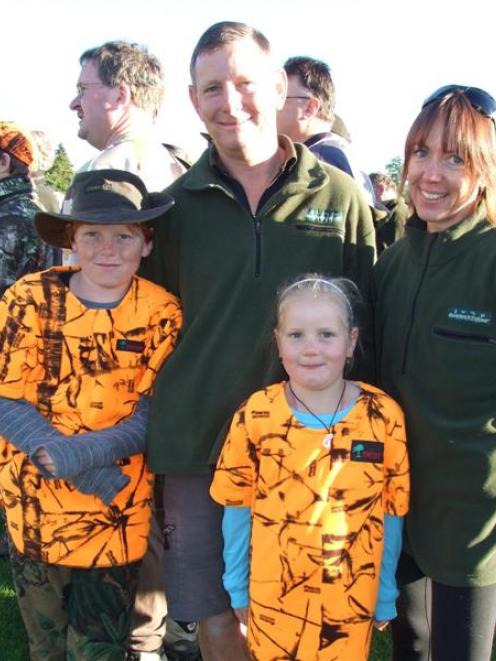 Mike and Kate Evans, of Arrowtown, with their children Nicholas (11) and Mikayla (7), are among more than 430 people taking part in this year's Great Easter Bunny Hunt. The event holds special significance for the Evans family because it was on a bunny hunt, 17 years ago, that Mike proposed to Kate. Photo by Lynda van Kempen.
The Great Easter Bunny Hunt can have a happy ending - just ask Mike and Kate Evans.

Mike proposed to Kate during the event 17 years ago, and now happily married and living in Arrowtown, the couple are back in the hunt this year in a team that includes son Nicholas and daughter Mikayla.

"It all started back in 1995, when we were living in the North Island. We were on the Easter bunny shoot and I proposed to Kate, over fish and chips in Cromwell," Mr Evans said yesterday.

The family members were among 432 hunters in 36 teams who headed off yesterday to decimate the rabbit population on farmland in Central Otago and Wanaka, as part of the annual Alexandra bunny hunt.

The Evans family was in team Ten Eighty, a composite team of Nelson, Balclutha and Arrowtown people, and said it was the first time Mikayla had taken part.

"She's so excited that she didn't get much sleep last night," her father said.

"When Mikayla was a few years younger, she worried that the Easter Bunny would get mixed up in the hunt, but we explained that he's tricky, so that wouldn't happen," Mrs Evans said.

Mikayla and Nicholas would be acting as support crew, as "picker-uppers" and maybe doing some cooking or providing hot drinks for the hunters. The family was looking forward to spending some time together "away from any electronic equipment", Mrs Evans said.

"You get to see countryside that you would never normally have access to and that's a real privilege," Mr Evans added.

"It's a real good weekend, getting out in the fresh air and getting some exercise; spending time with your family. It's not really about how many rabbits you get."

Now in its 21st year, the bunny hunt is organised by the Alexandra Lions Club. The event attracts hunters from all over the country and is so popular that this year 15 teams missed out, because there were not enough blocks of land available to meet the demand.

Hunters will converge on Alexandra's Pioneer Park today at noon to display their hauls.

Last year's top team shot 1664 rabbits, contributing to the overall tally of 22,904 during the 24-hour contest.