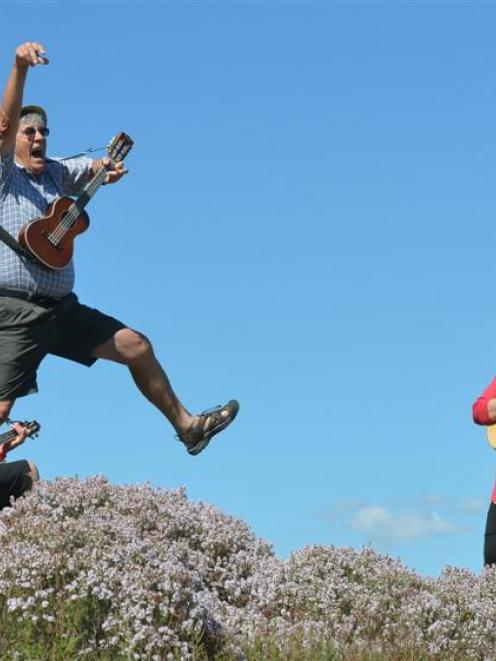 Ukes in Thyme members (from left) Diane and Barry Bemrose and Meredith Kerrisk get in some practice before tomorrow's Alexandra Thyme Festival concert. Photo by Stephen Jaquiery.
This is one performance that will always be in thyme.

The 20-strong Ukes in Thyme group will be centre stage at Pioneer Park at noon tomorrow performing a free concert as part of the Alexandra Thyme Festival. Ukulele instructor Barry Bemrose, of Alexandra, said the group was made up of his pupils, mostly Alexandra and Clyde residents.

''It should be really good. We'll bash it up and see how it all works out. It'll be fun, anyway, and should get people singing along with us.''

More people were discovering the attraction of ukuleles, he said.

''It's so easy and everyone can play as a group. It's not like in a band, where there's one of two people doing guitar solos; the beauty of this is everyone joins in.''

Another group member, Meredith Kerrisk, of Alexandra, said playing the ukulele was addictive.

''It's just so easy. I was a pianist and on classical pieces, you might spend hours learning one overture but this is so quick to pick up.''

Despite the stereotype, the Alexandra group would not be sporting loud Hawaiian shirts and, indeed, ''there's very little Hawaiian influence at all'' Mr Bemrose said.

The concert music would range from rock 'n' roll to modern Bruno Mars songs and the players were also a diverse bunch, aged from those in their 20s up to ''God knows - maybe some in their 60s or 70s''.

''It's becoming more and more popular and our aim is to have 100 people meeting every week to play our ukuleles and have a bit of a singalong. We're well on the way.''

He is also part of the LX Ukes group, based in Alexandra, that performs at various events throughout the year and donates its proceeds to charity. It raised $3500 in the past year.

The nine-day Thyme Festival has ''Cherishing our Environment'' as the theme and champions sustainable living, as well as running art, craft, music and cooking workshops. It finishes on Sunday with markets, a talent quest, ''sustainable alley'' and food swap, all at Pioneer Park.

One of the festival co-ordinators, Kathi McLean, said the children's art exhibition at Alexandra Community House, along with murals which had been painted on the side wall of a Centennial Ave cafe, were among the highlights of the festival so far.

''The homegrown events - like the Home Brew and Wild Wallaby workshop - have also been really popular.''

The festival was revamped in 2002 and continued to evolve every year, to ''keep it fresh'', she said.