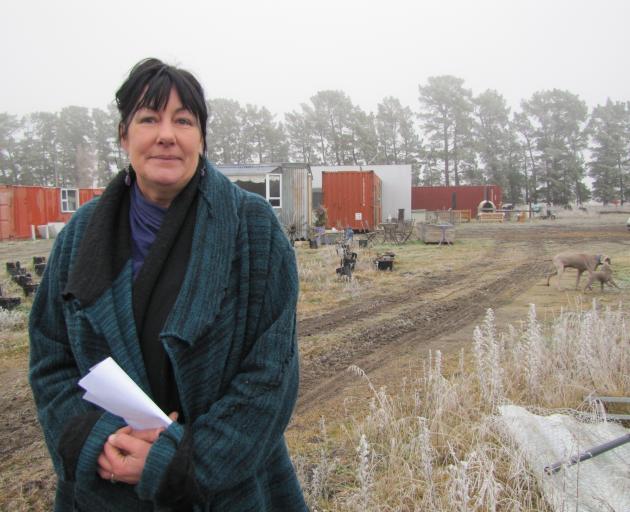 Adrienne Lamb, of Letts Gully Rd, near Alexandra, braves the cold after a power outage yesterday that 123 rural Alexandra residents were not told about. PHOTO: PAM JONES
Aurora Energy has apologised to more than 100 customers in rural Alexandra who had their power cut off for about six hours without notice yesterday.

The company blamed the lack of communication on a technical issue.

But Letts Gully resident Adrienne Lamb said residents should not be faced with power cuts in sub-zero temperatures anyway.

Mrs Lamb and 122 other residential customers in Letts Gully Rd had their power cut off at 9am yesterday without notice, in an outage that lasted until 3.14pm. The power was cut because of Aurora's power pole replacement programme.

MetService temperatures show it was -1degC at 10am in Alexandra yesterday and at Mrs Lamb's property there was fog, a hoar frost and the ground was frozen.

Her home is heated by a gas heater that requires electricity to operate so she had no heating, and one of her two water sources is driven by an electric pump so was not working. The other outdoor water supply was frozen.

Most other Letts Gully Rd residents also needed electric pumps to operate their water supplies and so would not have had water yesterday, Mrs Lamb said.

She also had to turn away two staff members who were coming to work in a commercial kitchen at her property to make up for work they would be unable to do tomorrow, when another power outage is scheduled.

Another Letts Gully Rd resident, John Grant, said he had rung around as many Letts Gully Rd residents as he could yesterday after the power was cut off to check everyone was all right. Those with wood fires would be able to cope, but those dependent on electricity to heat their home would have more difficulty, and to have two days without power in one week in such cold temperatures was ``not good'', he said.

Aurora general manager operations and risk John Campbell said by the time Aurora realised the affected residents had not been notified the power was going off yesterday, it was too late to cancel the work.

Aurora apologised for the incident and made direct contact with many of the affected customers and had discussed compensation.

Mrs Lamb said an Aurora staff member told her she would be entitled to $70 compensation.

Mr Campbell said other planned power outages, including some which would affect 125 Letts Gully Rd residents tomorrow, would continue.

Plan for cemetery to double in size