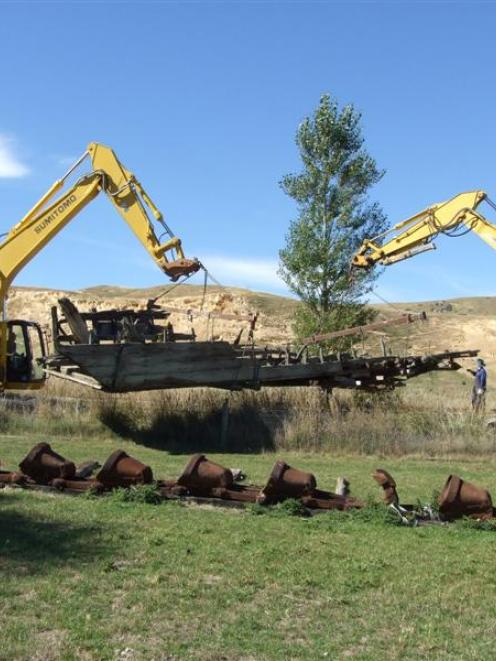 Digger operators Tony Gare (left) and Lindsay McStay manoeuvre the Chatto Creek dredge pontoon on to its new site, supervised by Dave Symons. In the foreground is the bucket chain from the dredge, which was shifted in November. Photo by Lynda van Kempen.
A bit of creaking is to be expected, when your bones are 114 years old.

The Chatto Creek Dredge pontoon, made of Australian hardwood and clad in New Zealand kauri was yesterday shifted 4km from the Manuherikia riverbank to a paddock beside the Chatto Creek Tavern.

The Otago Goldfields Heritage Trust moved the other remnants of the historic dredge to the same site in November and the 20m pontoon was shifted yesterday on the back of a trailer, mostly along the Otago Central Rail Trail, with the permission of the Department of Conservation.

Some creaking could be heard as the structure was gently hoisted off the trailer using two diggers and lifted over the fence from the trail, but it stayed intact, to the delight of trust members and the team of seven people involved in the pontoon's shift.

''You beauty,'' was the heartfelt comment from trust secretary Terry Davis as the mission was completed.

The new site was more accessible for public viewing and the pieces were placed in roughly the order they would be if the equipment was operational, he said.

The dredge worked for two years on the Manuherikia River, until 1901 and was ''not particularly successful in terms of gold recovery,'' historian and trust member Rex Johnson, of Cromwell, said.

''There were at least 16 dredges between the Manuherikia Road Rail Bridge and the Alexandra Road Rail Bridge in 1900, and that compared with a total of 288 dredges working throughout Otago and Southland at that time.

''Its average recovery was 10-40 ounces of gold a week, while the bigger dredges on the Clutha River were getting 100-200 ounces in the prime spots.''

The pieces of the dredge were originally on the riverbank and submerged in the river, before being recovered.