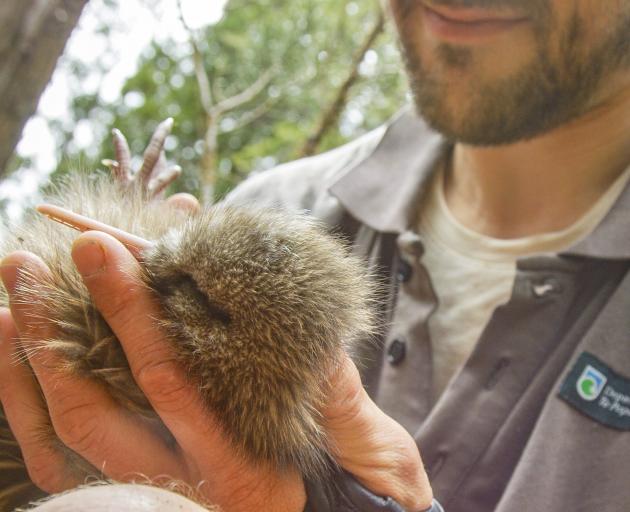 Doc ranger Tim Raemaekers attaches a transmitter to one of the Southern Fiordland tokoeka kiwi chicks.
Kiwi chicks hatching in the remote southwest of Fiordland this breeding season have been given a chance of reaching adulthood following an aerial 1080 poison bait operation last month.

For the first time about 40,000ha of public conservation land on Wet Jacket Peninsula in Fiordland National Park was included in the Department of Conservation’s predator operation. Doc operations director southern South Island Aaron Fleming said the primary purpose of the operation was to protect vulnerable kiwi chicks which had been suffering from heavy stoat predation.

"Through the Save Our Iconic Kiwi programme, we’ve been monitoring kiwi chick survival at Shy Lake, in the northern peninsula, for the past three breeding seasons.

"In almost every case, 30 out of 34 monitored chicks, they’ve been confirmed or suspected to be killed by stoats," he said.

Based on that data, the future for kiwis at that site was looking increasingly grim, Mr Fleming said.

Twenty-one kea were also being monitored on Wet Jacket Peninsula but before the predator control operation only six transmitters were still active.

Following the operation three kea were found dead and toxicology reports confirmed the cause was 1080.

Mr Fleming said the loss of any kea was always upsetting but at a population level, kea did better with 1080 predator control than without it.

"However, it doesn’t make it any easier on the team when we do lose individuals, despite the bigger picture,” he said.