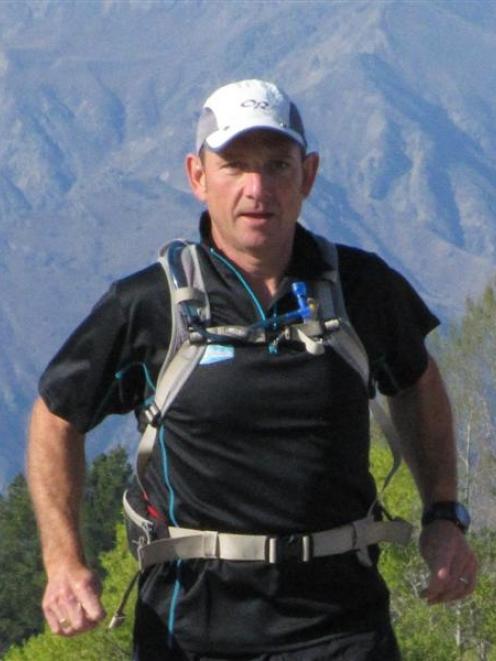 Mal Law grinds out another day on the marathon trail. Photo by www.7in7.org.nz
Surely, charity runner Mal Law (50) would have to be a complete lunatic. Seven back-country runs in seven days totalling at least 360km? And nothing even remotely as flat as a pancake on the itinerary?

In a Central Otago heat wave?

Why would he do it?

Because every day, six New Zealand children and adults are diagnosed with leukaemia, lymphoma, myeloma or related blood conditions.

The Leukaemia and Blood Foundation, which is benefiting from Law's energy, receives no government funding and relies on public goodwill. The foundation provides essential patient support services and costs more than $1000 a day to run.

Two years ago he sold his business, intending to take the summer off. He could not resist another challenge, however, and ran 360km for the Leukaemia and Blood Foundation last year, covering all seven Great Walks of New Zealand in one week.

Many had suggested the challenge was impossible.

For Law, the greatest satisfaction came not from proving people wrong but from raising $85,000 and the feeling he had honoured Alan's memory.

The memory of exhaustion and pain of 2009 obviously did not linger too long, because he decided to do it again.

This time, the 7in7 Challenge has covered back country and alpine routes around Wanaka, Queenstown and Te Anau.

In 2009, an emotional Law finished the final run, the 60km Kepler Challenge, in 10 hours, a flood of tears and a shower of champagne.

He had just run for 66 hours over seven days and described it as "one of the very best days of my life".

But this morning his mission is not yet over.

The best is yet to come, the moment Law is looking forward to the most.

He hopes to cross the Kepler finish line sometime this afternoon, in the company of his 13-year-old son Beinn, who intends running the final 10km.

Last night, after knocking off the Greenstone-Mavora walkway in 10 hours, he was obviously looking forward to finishing his seventh and final big Southern New Zealand run in seven days.

"I'm going to enjoy the party at the end," he said.